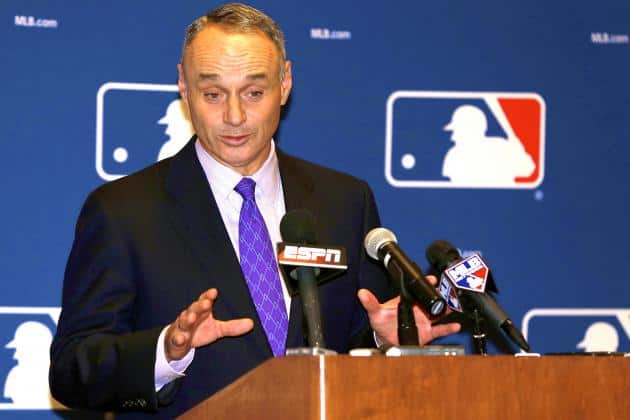 Improving the pace of play has been on of the top priorities of MLB Commissioner Rob Manfred ever since he took office in January 2015. He has tried to take measures to shorten the length of games, but nine-inning games in baseball are seven minutes longer than they were at this time last year, and Manfred is unhappy about it.

At the moment, the average nine-inning game is a few seconds more than three full hours. Manfred emphasized pace of play when he took over for Bud Selig, and early in the 2015 season he was getting results. However, the average game time slowly increased over the course of the season, going from two hours and 53 minutes roughly six weeks into the season to two hours and 56 minutes by season’s end. Now the average game time has crept back over three hours.

“We think the single biggest thing we had going for us early in the year [last season] was player focus on the topic,” Manfred explains. “And we feel like we’ve lost a little focus. So we’re doing a variety of things to try to get that focus back.” Part of that focus includes the commissioner’s office making personal phone calls to players who have habitually violated the game’s pace-of-play rules.

Manfred believes that the cold weather that has plagued much of the country throughout April and the first half of May has played a factor in games being longer. He also notes that pitch counts are at their highest level in seven years, adding to the time of games. Manfred is hopeful that warmer weather as we move closer to summer will help to shorten games. He also says that baseball needs “creative ways” to help speed up games.

One thing that Manfred says is not having an impact on the time of games is instant replay, although some may disagree with that. The Commissioner admits that he is not pleased by replays that take four or five minutes, but contends that the league averages less than one replay per game, despite a 35% increase in reviews from last year. Thus, he asserts that replay is not contributing to longer game times. However, he does say the league is looking for ways to improve the replay system for next season.

It seems that Manfred is devising some kind of plan to shorten game times and improve pace of play this offseason. He declined to go into specifics, only saying that it will be a major topic during the next labor negotiations. “We’re going to put a package of issues on the table with the union,” Manfred says, adding that speculating on what will be included is pointless at this point in time. The Commissioner concludes, “I think the best I can do for you at this point is to say I’m prepared to think about additional rule changes that are relevant to the issue of pace of play.”