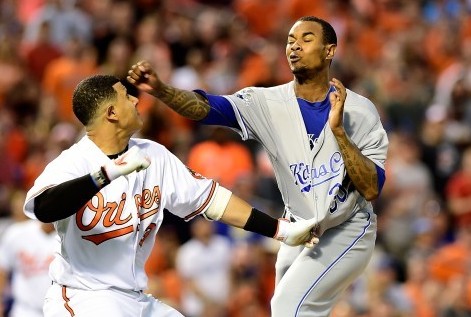 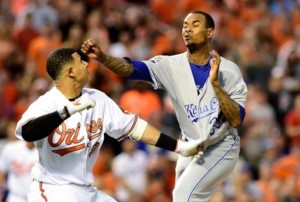 Less than 48 hours after the benches-clearing incident that revolved around Kansas City Royals pitcher Yordano Ventura and Baltimore Orioles’ third baseman Manny Machado, Major League Baseball handed down punishments for both players. MLB announced Thursday evening that Ventura will face a nine-game suspension, while Machado will face a four-game suspension. Both players will appeal the suspensions and will be allowed to play until the appeals are heard.

MLB’s statement cites Ventura for “intentionally throwing at Machado and fighting.” He was also fined an undisclosed amount of money. Ventura said after the game that he did not intentionally throw at Machado, only saying that his game plan was to throw fastballs inside and breaking balls in the dirt. The 5th inning pitch that hit Machado was a 99-mph fastball from Ventura, who was suspended for seven games last season for a similar incident with Adam Eaton that led to a benches-clearing altercation between the Royals and Chicago White Sox.

The Royals have not made a formal response to the news of the suspension. However, Kansas City GM spoke about the possibility on Wednesday, saying, “The Commissioner’s Office does a tremendous job of handling these situations fairly with proper punishment. And whatever is decided in this case, we will accept.” Depending on when the appeal is heard, a nine-game suspension may only cost Ventura one turn in Kansas City’s rotation.

Meanwhile, Machado was given a four-game suspension, as well as a fine, for charging the mound and getting involved in a physical altercation with Ventura after getting hit. “They came up with a decision and obviously I’m going to appeal it,” Machado said Thursday after receiving the news. “We’ll see what happens.” Machado was suspended once before in 2014, missing five games after he threw his bat in the direct of third base following a pitch thrown inside to him.

Baltimore manager Buck Showalter does not expect Machado’s appeal to be heard until after the Orioles finish their four-game series in Toronto, which started Thursday night. Machado was in the lineup Thursday, going 2 for 5 with a double and RBI. Meanwhile, the Royals, who are nursing a seven-game losing streak, were off Thursday and start a weekend series with the White Sox Friday night.