MLB Rumors: One Last Guess At Each Team’s Odds of Signing Matt Wieters 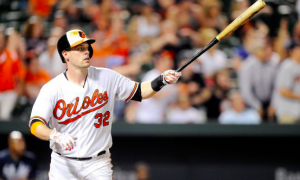 With spring training just a few days away, free agent catcher Matt Wieters remains unsigned. Heading into the offseason, Wieters was arguably the best catcher available and among the best offensive players on the open market. Over the course of the winter, roughly a dozen teams have been linked to Wieters one way or another, making it difficult to predict where he’ll end up. We’ve done this before, but one final time, here are the odds of each team signing Wieters for the 2017 season.

The Angels remain connected to Wieters, and may be the best fit for him at this point in the offseason. Martin Maldonado is a solid backstop, but he doesn’t have the offensive upside of Wieters. Moreover, the Angels have upgraded at several positions this offseason, so it’s not hard to imagine them doing the same behind the plate, especially with the price to sign Wieters dropping.

Rumors linking the Brewers to Wieters surfaced a few weeks ago, putting Milwaukee in the conversation. There hasn’t been much to link him to the Brewers since then, as Milwaukee already has three catchers heading into spring training. However, signing Wieters would be a great jolt of life for a rebuilding team like the Brewers, and on a one-year deal, he could possibly give them a useful trade chip this summer.

Washington appears to be a perfect fit for Wieters, considering the fact that the Nationals are in win-now mode. However, there have been reports that the Nationals aren’t a huge fan of Wieters and may not be able to spend the money to sign him even if they wanted to. Nevertheless, even with Derek Norris lined up as the every day catcher in Washington, the Nationals remain a possibility.

Wieters returning to Baltimore has seemed unlikely ever since the team signed Welington Castillo, but Mark Trumbo also appeared unlikely to re-sign with the Orioles, and that ended up happening. The Orioles are the only organization Wieters has ever known, and that sentimentality can’t be discounted completely. Considering his long-standing relationship with the Orioles, Wieters could still end up going back to Baltimore.

The Rays signed Wilson Ramos earlier this offseason, but he won’t be back behind the plate until later in the season, if at all, after suffering an ACL tear last season. This opens the door for Wieters to become Tampa Bay’s catcher in 2017, knowing he could DH or even play first base when Ramos comes back. The Rays have been said to be looking for more offense, and even after bringing back Logan Morrison, the door is still open to sign a player like Wieters.

There is some concern over the health of Devin Mesoraco, making the Reds a candidate to sign Wieters. Cincinnati’s interest in Wieters seems to have waned in recent weeks, but they have been connected to him at times this winter. Moreover, the Reds believe they have a chance to compete this year, and signing Wieters would give them a nice boost.

At this point, it wouldn’t be a surprise to see Wieters end up with a team other than the ones listed above. Teams like the Mets, Rockies, and White Sox have also been connected to Wieters, and one of those teams could swoop in at the last minute to sign him. It’s also been speculated that Wieters could wait until after spring training starts to see if an injury brings a new team into the mix or creates a greater need for him. Long story short, where Wieters ends up is still anybody’s guess.