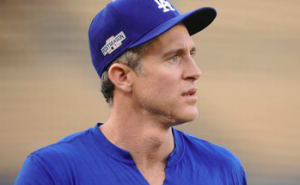 It’s been a slow offseason for a lot of free agents, and that’s been particularly true for second baseman Chase Utley, who remains unsigned with the start of spring training less than a week away. However, Ken Rosenthal is reporting that Utley is close to signing with a team and has narrowed down to options to four teams. Unfortunately, the identity of those four teams is a mystery. Utley is said to only be considering teams that are playoff contenders, although he may also prefer to be an everyday player rather than a bench piece.

There have been few rumors linking Utley to any specific teams this winter, making it difficult to predict where he’ll end up. That being said, here is a look at the teams we think are among the four teams Utley is considering.

Oakland has said that Jed Lowrie will be the team’s primary second baseman, but the A’s could change their mind if they sign Utley, knowing Lowrie is still around as a backup plan. Of course, the A’s aren’t exactly in a position to contend this year, so they may not be on Utley’s radar.

The Blue Jays are certainly a contender, and they also could be worried about the health of second baseman Devon Travis, who has missed a lot of time the past two seasons with shoulder problems, which could put Utley on their radar. Travis had a productive season in 2016, but having him split time with Utley isn’t a bad idea, especially since Toronto can’t feel too comfortable with backup Ryan Goins taking over if Travis gets hurt again. If Utley is cool splitting playing time with Travis, the Blue Jays make a lot of sense.

The Braves could be a surprise playoff contender in 2017, but they may not be established enough to attract Utley. However, there could be a spot for him. Sean Rodriguez appears to be in line to get most of the time at second base while Atlanta waits for prospect Ozzie Albies. But Rodriguez could be moved to a super-utility role with Utley taking over at second base, making the Braves a possible fit.

The Cardinals were rumored to have some interest in Brian Dozier earlier this winter, and so they don’t appear to be sold on Kolten Wong at second base, perhaps opening the door for Utley. St. Louis is obviously a contender, likely putting the Cardinals on Utley’s radar. Of course, if the Cardinals are unsatisfied with Wong, they do have Jedd Gyorko, who is fresh off a 30-home run season, as another option at second base, so they may not have a huge need for Utley.

After acquiring Logan Forsythe from the Rays, it all but eliminated Utley returning to the Dodgers. Of course, such a scenario can’t be ruled out entirely, especially if Utley could also serve as a backup at third base given the team’s lack of infield depth. If Utley were to accept a bench role, he might decide to return to Los Angeles.

The Giants also had some level of interest in Dozier, and so they could consider Utley as well. Obviously, they would have to rearrange their infield to make it happen, and Utley would have to spend more time coming off the bench than in the starting lineup, but it’s not impossible.

The reigning American League champs have been recently mentioned in connection with Utley. However, there doesn’t appear to be an obvious fit with Jason Kipnis, who also bats left-handed, entrenched at second base. If Utley or Kipnis were to attempt a move to third base, Jose Ramirez could become a super-utility player, but there’s no reason for the Indians to make such a radical change.

The Pirates don’t appear to be enamored with Josh Harrison at second base, so they may be considering Utley. On top of that, moving Harrison to third base may become necessary considering the recent off-fiend problems of current third baseman Jung Ho Kang. Pittsburgh has a few other internal options, so pursuing Utley is unlikely, but not impossible.

Whit Merrifield appears to be penciled in as Kansas City’s primary second baseman this year, but with just over 300 major league at bats, the Royals could opt for a veteran like Utley at second base. Raul Mondesi may still be a year away, so Utley could be a place holder while the Royals wait for him to be major league ready. The Royals have made moves this offseason indicating that they’d like to compete, and that could be enough to attract Utley to a team just one year removed from a World Series title.

Obviously, this is more than four teams, but with so little information out there regarding Utley, it’s important to consider all possibilities. If I were to make an educated guess, I would say the Blue Jays, Dodgers, and Royals are the most likely landing spots for Utley, with the Pirates and Braves the top dark horse candidates. Of course, none of the teams on our list can be counted out completely, as it remains next to impossible to predict who Utley will sign with in 2017.