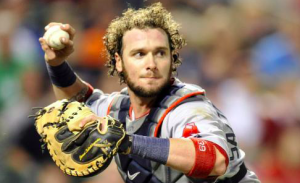 After agreeing to bring back outfielder Jose Bautista, the Toronto Blue Jays appear ready to put a bow on the offseason and head to spring training. But if there’s one thing left on Toronto’s to-do list, it’s add a backup catcher. Russell Martin is entrenched as the starting catcher, but the Blue Jays have no clear backup at the moment. One name to emerge from the rumor mill is Jarrod Saltalamacchia, with Jerry Crasnick reporting on Monday that the Blue Jays have expressed interest in the veteran.

Saltalamacchia is a rather interesting free agent target. The switch-hitting 31-year old has been one of the most productive offensive catchers in baseball at various points in his career. However, he’s coming off a dreadful 2016 season with the Detroit Tigers, particularly the second half of the season when he hit just .130 with a .471 OPS.

Based on those numbers, it’s not surprising to see Saltalamacchia still unsigned at this point in the offseason. That being said, it’s not hard to envision him having a bounce back season and putting up the kinds of numbers, particularly in the power department, that he did earlier in his career. At the same time, Saltalamacchia has never been known for being a strong defensive backstop, which is the prototype most teams look for when it comes to a backup catcher.

Of course, the Blue Jays have been distracted for much of the offseason in their pursuit of an outfielder, and in the meantime backup catchers like Chris Iannetta and Kurt Suzuki have signed elsewhere, giving Toronto limited options. Still left on the free agent market are catchers like Brayan Peña, former Blue Jay Dioner Navarro, and Nick Hundley, which is why Saltalamacchia appears to be a viable option at this point. At this point, the Blue Jays have not been linked to Matt Wieters, as there likely wouldn’t be enough playing time for both him and Martin.

Internally, the Blue Jays have few options. Minor leaguer A.J. Jimenez is currently behind Martin on the depth chart, although he’s spent parts of the last four seasons in triple-A without earning a big league call up, so it’s safe to assume the Blue Jays aren’t sold on him being a major league catcher.

The Blue Jays have also picked up Juan Graterol off waivers, making him a candidate to backup Martin this year. Of course, the 27-year old Graterol has just 14 major league at bats. He’s also been placed on waivers four times this winter, as no big league team appears to be sold on his ability to contribute at the highest level. This makes it unlikely that he will prove to be Toronto’s answer behind the plate.

Toronto is currently waiting for prospect Reese McGuire, who currently ranks as the fourth best catching prospects in baseball. However, it’s unlikely he’ll be major league ready until late in the 2017 season at the earliest. In the meantime, the Blue Jays need a backup catcher, and it’s likely they’ll have to look to the free agent market to find one. The options aren’t all that enticing, but Saltalamacchia appears to be one name that stands out to the Blue Jays, meaning he could be the one that ends up serving as Martin’s backup in 2017.