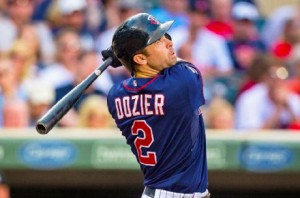 As January quickly approaches and the baseball offseason rolls on, the most prominent position player on the trade market continues to be Minnesota Twins second baseman Brian Dozier. The Los Angeles Dodgers and San Francisco are two teams with an established interest in Dozier, and now there are rumors linking the St. Louis Cardinals to trade talks with the Twins. Reports out of St. Louis indicate the Cardinals are “very much in” when it comes to the pursuit of Dozier, potentially giving the Dodgers some competition after Los Angeles has long been considered the favorites to land Dozier.

On the surface, interest in Dozier from the Cardinals is surprising to hear. Kolten Wong is penciled in as the starting second baseman for 2017, while Jedd Gyorko is the top backup and coming off the best season of his career. The Cardinals have also been linked to some first baseman on the free agent market, which could allow them to shift Matt Carpenter to second base if they were unhappy with what they have at that position.

However, the Cardinals may not feel secure with Wong at second base considering his struggles last season. Wong was demoted to the minors on multiple occasions in 2016, and while the Cardinals have said all the right things to help keep his confidence high, his future in St. Louis doesn’t appear to be completely secure. That uncertainty could be the source of the team’s interest in Dozier, especially if they’d like to keep Gyorko in a backup role or believe his 2016 numbers could be an aberration.

The Cardinals are also in the unique position (at least for them) of not making the playoffs last season. With the Chicago Cubs seemingly in position to dominate the NL Central for years to come, St. Louis may be feeling pressure to make some bold moves this offseason. The Cardinals have already spent big to sign Dexter Fowler, and trading for Dozier after his 42-home run season in 2016 would also qualify as a bold move.

Considering Dozier’s production last season and the fact that he’ll make just $15 million over the next two seasons, Dozier would be perfect for the Cardinals, if they do indeed wish to replace Wong at second base. Of course, even if a player like Wong or Gyorko were involved in the trade, the Twins would likely ask for at least one elite prospect in a trade for Dozier. The only prospect that fits that description is pitcher Alex Reyes, who the Cardinals would be hesitant to trade.

One of the reasons the Dodgers haven’t been able to make a deal for Dozier is their reluctance to give up first base prospect Cody Bellinger, who the Twins are requesting be involved. It’s unclear if the Twins view Reyes as a player who would have to be the centerpiece of a deal that sends Dozier to St. Louis, but it’s a safe bet that Minnesota would set their sites high and ask for him.

At the moment, the asking price for Dozier remains quite high, as it has all along. The Dodgers have thus far been unwilling to meet Minnesota’s asking price, and it’ll be interesting to see if the presence of a team like the Cardinals in the competition for Dozier spurs them on to increase their bid. It remains to be seen how high St. Louis is willing to go to make a trade for Dozier happen, but they appear to be a legitimate contender to land Dozier. Stay tuned; this could get interesting.