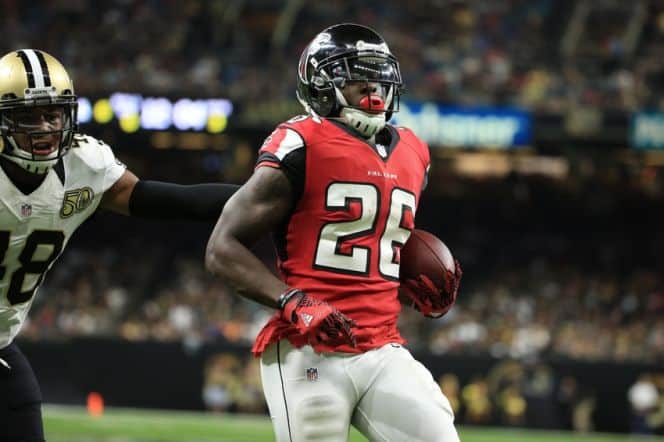 Monday night found the New Orleans Saints hoping they could get their first win of the season, and to make it even better it would come against a division foe. Since the Carolina Panthers lost to the Minnesota Vikings Sunday, a win would mean the Atlanta Falcons would be in first place in the division. Of course, being in first doesn’t mean much in September. But it is still nice.

Both have high-powered offenses which meant fans should be treated to an exciting high-scoring affair—and they were. Atlanta won 45-32, but not in the fashion fans would expect.

It wasn’t all about the pass like fans have grown accustomed to whenever Atlanta plays. Matt Ryan ended the night with barely more passing yards then the team had rushing yards (Ryan was 20-30 for 240 yards with two touchdowns; the running game generated 217 yards).

The Matt Ryan to Julio Jones connection is usually the bread and butter of the offense, but Monday night it just wasn’t working, and luckily the team didn’t need it to. For only the fourth time in his career, Jones had zero catches at the end of the first half. He didn’t end up getting his first (and only) catch till late in the third quarter (and for just 16 yards).

While his fantasy owners were not very happy, Falcons fans were ecstatic to see the running game work as well as it did. Atlanta’s version of Thunder (Devonta Freeman) and Lightning (Tevin Coleman) accounted for 194 of the team’s 217 rushing yards (Matt Ryan had the remaining 23) on 26 carries (14 for Freeman and 12 for Coleman). Coleman scored all three of the team’s rushing touchdowns (ESPN).

“Whoever is in, whoever gets the yards and gets the touchdowns, that’s just what it is,” Coleman said after the game. “It’s not really supposed to be me or Free. We’re playing together. We’re both balling. We’re both great players.”

The duo chipped in another 102 yards in the passing game. Freeman made five receptions for 55 yards and a touchdown while Coleman made three catches for 47 yards.

Atlanta appears to have an offense that can compete with the best of the best, but the defense is going to keep the team from making a deep run in the playoff. Yes, the Saints have a high-powered offense powered by one of the best quarterbacks in the game, but you can’t allow 474 yards of offense to anyone and expect to win a championship.

For the Saints, it was more of the same for them. No team has generated as much offense as them since the start of the 2012 season, but at the same time no one has given up as much either. A team should win when it scores 32 points and generates almost 500 yards of offense, but for the Saints, it isn’t because their defense can’t stop anyone. The team did try to address its defensive shortcomings by drafting Louisville defensive tackle Sheldon Rankins with the No. 12 pick. But he broke his leg in practice and is on the IR (but designated to return list).

The Falcons may find their stay on top of the division short-lived with the Carolina Panthers coming to town next week followed by a trip to Denver and then Seattle. New Orleans will try to break into the win column next week when they travel to San Diego to take on the Chargers.