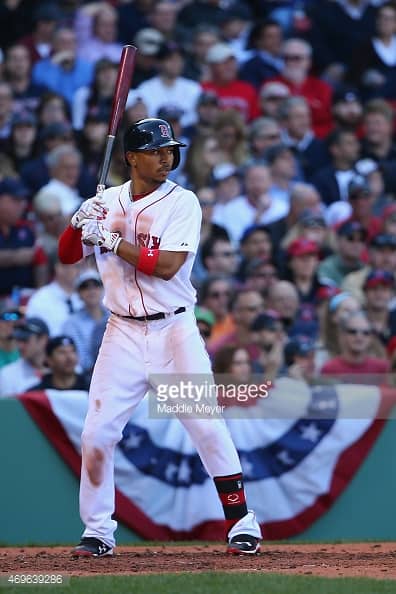 Last week, Jackie Bradley Jr.’s 29-game hitting streak came to an end. Just a few days later, the spotlight in Boston is already shifting over to Mookie Betts. Tuesday night against the Baltimore Orioles, Betts hit three home runs and extended his hitting streak to 24 games, as he carried the Red Sox to a 6-2 win and is quickly closing in on matching Bradley’s hit streak.

Betts is the first leadoff hitter in Red Sox history to hit three home runs in one game. He’s the first major leaguer to hit three homers from the leadoff spot since Justin Upton did it in 2012. Betts set the tone early, hitting his first home run to leadoff the game. He followed it up with a three-run homer in the third inning. Betts then hit his third homer of the night in the 7th inning. In the 9th inning, Betts had a chance to hit his fourth homer of the night, but ended up grounding out harmlessly, setting for three.

“This is probably the best night,” Betts said of his performance afterwards. “It’s the first time I’ve ever done that.” However, he also admonished himself for his performance this year as a whole. “I feel like I haven’t been consistent,” he said. “One game I’ll have a good game, and I’ll go 0-for-20, especially in some bad spots when I can get a couple RBIs or something. I’m just trying to put it all together.”

Betts’ average may be down a bit from last year, but his power numbers are up, especially after a three-home-run night. But none of his teammates seem to be complaining. “Every time I see him hit, I think he’s going to hit a home run,” said Boston shortstop Xander Bogaerts. “It’s just the presence he has in the batter’s box. I just feel like anything you leave over there, he’s going to hit it out.”

Even the great David Ortiz is in awe of Betts’ ability, saying after the game, “He’s got five tools, man, and he’s smart. He’s got great hands. He knows about the strike zone really well. He knows the minute that he gets out of it, like we always talk, he can get in trouble. He’s so young, man. It’s so impressive how he handles his business.”

Just in case the three home runs weren’t enough, Betts made a spectacular diving catch in the 7th inning that helped to prevent any possible comeback from the Orioles. The win was Boston’s third in a row and second straight against Baltimore, who is currently the biggest competition the Red Sox have atop the AL East. After Betts’ three blasts Tuesday night, the Red Sox lead the Orioles by three games and have a chance to further that lead over the next two days. Meanwhile, Betts will hope to continue his hitting streak and find a way to follow up his three-home-run performance.