Nationals Continue To Deny Harper Is Playing with Shoulder Injury 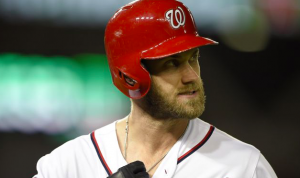 Verducci continues to insist that Harper is being plagued by an issue with his right shoulder, and that it’s been bothering him since early July. He cites a source close to Harper who said, “At one point he could barely throw the ball 40 feet.” Verducci also says that Washington manager Dusty Baker admitted to him that “the shoulder thing” is an issue. However, Baker denied he made that comment to Verducci with regard to Harper.

“I know they had some quotes from me, but I was talking about the past,” Baker said about Verducci’s report. “Bryce said the information on the shoulder didn’t come from him. It’s not in the injury report. We treated that shoulder in the past. If I did make a mistake, it was because it was in his neck, which is connected to the shoulder. That’s it.”

Harper missed five straight games in August with what the team called a “stiff neck.” That is when Verducci first reported that Harper had a shoulder injury that was causing him to struggle and contributed him to hitting just .176 during the month of July.

After a strong August following those five days off, Harper is once again slumping. Thus far in September, Harper is hitting .167 and has just one home run. Verducci asserts that Harper’s shoulder must still be a problem for him or he would have broken out of his September slump by now. Baker, however, disagrees, saying that Harper is simply off balance.

“He has been hitting lots. He’s been hitting a lot of extra in the cage,” Baker said. “Now what I did say, I felt his balance was off, and that’s my opinion. I’m not changing that. I see what I see.”

Washington GM Mike Rizzo has also denied Verducci’s report, just as he did after Verducci’s original report in August. “The report is wrong, the information is wrong,” Rizzo said. “I just talked to the player again because of the new stuff that came out, and he says it’s the 4-5 days he had with the neck. That’s it.”

Harper, meanwhile, will not confirm or deny Verducci’s report. Thus, it it Verducci’s word, and the word of his sources, against the word of Baker and Rizzo. The only thing we know for sure is that Harper is in a slump two weeks before the start of the postseason. We know that he’s hit just .216 with a .696 OPS since the all-star break, as opposed to hitting .256 with a .891 OPS the first half of the season. It’s not hard to see that something is different for Harper, but whether it’s a shoulder injury or simply an issue with his balance remains unclear.

The Nationals have a magic number of 4 to clinch the NL East, so booking their ticket to the postseason appears inevitable despite currently being on a four-game losing streak. However, if Harper is playing hurt, or possibly in a prolonged slump, it will certainly hinder Washington’s chances of making any noise in the postseason, which is why all eyes will be on Harper and his allegedly injured shoulder the rest of the season.