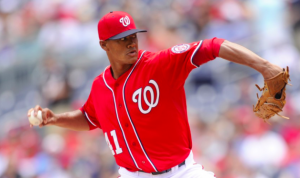 As the Washington Nationals cruise towards an NL East division championship and a spot in the postseason, they remain unsure over whether or not Stephen Strasburg will be healthy enough to pitch in the playoffs. However, Washington’s rotation may soon be getting stronger with the addition of Joe Ross. The Nationals are expected to activate Ross from the DL on Sunday, when he is scheduled to start the team’s series finale against the Atlanta Braves.

Ross has been on the DL since early July with should inflammation, and has taken longer to return than originally expected. Since going to the DL, Ross has made five minor league rehab starts in addition to throwing simulated games. He has not thrown more than 60 pitches in any of those rehab or simulated games, and so he’s expected to pitch for than three innings on Sunday.

“[It’s going to be] sort of like a Spring Training schedule that he is on right now,” National manager Dusty Baker said. “And let’s see how his arm feels. Then we’ll increase the workload if we can, or maybe he see how he does out of the ‘pen. It’s just important to us that he’s on the mound in a game. I think that’s before we start wondering what do we expect from him. We’re just happy that he’s on the mound.”

Many expected Ross to return from injury in a bullpen role, but the Nationals have managed to find a spot for him in the rotation to get him as much action as possible before the end of the regular season. With Washington enjoying such a comfortable lead atop the NL East, the Nationals are afforded such a luxury.

It’s still possible that Ross will end up pitching out of the bullpen in the postseason, but by giving him a start, the Nationals are able to keep their options open. Ross made three relief appearances late last season when the Nationals were attempting to curb his innings, so he has some experience in a bullpen role if he ends up being used in relief.

Of course, prior to being sidelined with the shoulder issue, Ross was following up an impressive rookie season last year with a strong sophomore campaign. In 16 starts this year, Ross is 7-4 with a 3.49 ERA. But whether he can recapture that form after not pitching in a big league game since July 2 remains to be seen.

Nevertheless, Baker is remaining optimistic that Ross will be able to pitch well in his return and contribute to the Nationals down the stretch and in the postseason. “I talk to guys in the league,” Baker said, “and they said he has as nasty stuff as any young right-hander that they have faced.”

Assuming Strasburg is unable to pitch in the postseason, the Nationals figure to have an open spot with regard to their no. 4 starter in the playoffs behind Max Scherzer, Gio Gonzalez, and Tanner Roark. If he can come back healthy and sharp, Ross has as good a chance as anyone to claim that spot in Washington’s postseason rotation, making Sunday an important game in the 2016 season for both Ross and the Nationals.