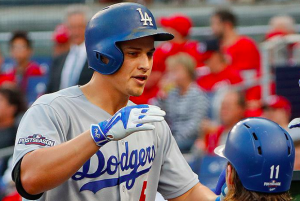 In what many expect to be the most tightly contested divisional series of the MLB playoffs, the Los Angeles Dodgers squeaked out a one-run win over the Washington Nationals in Game 1 of the NLDS. This will put an immense amount of pressure on the home team to win Game 2, or else the Nationals risk losing yet another NLDS following an impressive regular season record.

A matchup between two of the three highest paid pitchers in baseball was not quite the pitchers duel most were expecting. Max Scherzer lasted six innings, but allowed two home runs early in the game, ultimately taking the loss. Meanwhile, Clayton Kershaw continued to look human in the postseason. Despite getting the win, Kershaw scattered eight hits over five innings, giving up three runs. This puts more pressure on Washington’s rotation, which has less depth behind Scherzer than the Dodgers do behind Kershaw. It could also set up a rather interesting scenario if Kershaw and Scherzer match up again in a potential Game 5.

The Dodgers did a fine job of neutralizing lefties Bryce Harper and Daniel Murphy in Game 1, and they’re expecting lefty Rich Hill to do the same in Game 2. When Hill hasn’t been sidelined by a blister on his finger this season, he’s been one of the game’s best pitchers, meaning the Nationals could have their work cut out for them. Of course, Hill’s only postseason start came back in 2007 when he lasted only three innings, so even a veteran like him will have to adjust to being on the playoff stage.

Meanwhile, the Nationals will send Tanner Roark to the mound in Game 2. Despite winning 16 games this season, it’s a little surprising to see Roark get the nod over lefty Gio Gonzalez against a left-handed heavy lineup. Of course, Roark has been effective against lefties this season, holding them to a .214 batting average. Nevertheless, the Dodgers do have a potent lineup filled with lefties, so it could be difficult for Roark to traverse multiple times. When facing Los Angeles earlier this season, Roark gave up three runs in 7.1 innings, taking the loss, and he’ll have to do better than that against the Dodgers on Saturday.

Washington’s right-handed hitters could be the biggest X-factor in Game 2. Anthony Rendon and Ryan Zimmerman both had two hits each in Game 1 and both will need to provide productive at bats in Game 2 against Hill. The Nationals will also need Trea Turner and Jayson Werth to do more in Game 2 after both strike out three times each in Game 1. If Hill is able to contain Harper and Murphy, the Nationals will need their right-handed hitters to step up.

After taking Game 1, the Dodgers are slight road favorites to win Game 2 as well. Hill and Roark make for a fairly even pitching matchup, but Hill is more capable of having a dominating performance, and at this point the Dodgers also have a more potent offense. In their brief history in Washington, the Nationals tend to falter in the NLDS, and that will continue to be the case, as the Dodgers take a 2-0 series lead. Los Angeles wins 6-2.