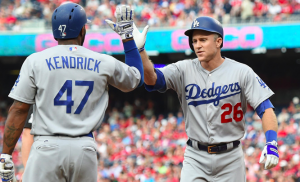 Lost in the shuffle in the National League amidst a brilliant season from the Chicago Cubs and a chaotic wild card race were the Washington Nationals and Los Angeles Dodgers, two teams that put together impressive seasons in their own right. Those two teams will now face one another in the NLDS. On paper, this is one of the most evenly matched series of the postseason. Let’s take a closer look to see if either of these teams has a distinct advantage over the other.

The Nationals had the better offensive numbers during the regular season, but the Dodgers will have the edge in the postseason. Washington is hurt by the fact that Daniel Murphy is returning from a muscle injury that kept him out the last week of the regular season, Bryce Harper is just coming back from a thumb injury, and Wilson Ramos is lost for the season with a torn ACL. Even with Murphy and Harper back for the NLDS, whether either is at full strength remains a mystery. Beyond Murphy and Harper, the Nationals have gotten great production from rookie Trea Turner, as well as power from Jayson Werth, Anthony Rendon, and Danny Espinosa, but the Nationals are perhaps too reliant on Murphy and Harper to carry them offensively.

The Dodgers, meanwhile, are a little more balanced and less reliant on one or two players. Los Angeles has power threats all over the field, most notably rookie Corey Seager, Justin Turner, Yasmani Grandal, and Joc Pederson. The team’s most veteran players like Adrian Gonzalez, Chase Utley, and Howie Kendrick are actually playing supporting roles, which speaks volumes about the depth the Dodgers have in their lineup. Los Angeles also has a couple potential x-factors in Josh Reddick and Yasiel Puig, who both started to catch fire late in the season, helping to give the Dodgers an offensive advantage over the Nationals.

At this time of year, health matters, and that’s why the Dodgers have an advantage over the Nationals with regard to starting pitching. Max Scherzer and Tanner Roark have both had exemplary seasons, while Gio Gonzalez is also a quality starter with postseason experience. However, not having Stephen Strasburg is a huge blow to Washington’s chances in the NLDS. Even with three starters that can hold their own against any lineup in baseball, the uncertainty with regard to who will start Game 4 could come back to bite the Nationals.

Meanwhile, the Dodgers finally have their starters healthy, at least the ones who matter most. Clayton Kershaw is back from the DL and was fantastic in September to close out the season. He may have a rather uneven resume when it comes to postseason performance, but if this series goes the distance, the Dodgers will gladly send him to the mound twice. Fellow lefty Rich Hill also appears healthy heading into the postseason after struggling with blisters all season. When he was healthy this season, Hill was among the best pitchers in baseball. Rookies Kenta Maeda and Julio Urias have also had strong seasons, and as long as they’re not bothered by the bright postseason lights, they match up well with whomever the Nationals send to the mound in Games 3 and 4, giving the Dodgers an edge in starting pitching.

These teams had the two best bullpens in the National League this year, so relief pitching is a strength for both. After parting ways with Jonathan Papelbon, the Nationals found a replacement in Mark Melancon and haven’t missed a beat since. With reliable setup men like Blake Treinen and Shawn Kelly, Washington has strong options from both sides, which will work to their advantage late in games.

The Dodgers also have a trustworthy closer in Kenley Jansen, who’s coming off the best season of his career. However, Los Angeles doesn’t quite have as much depth or experience among their setup men as the Nationals, which is why Washington gets the edge when it comes to the bullpen.

Both of these teams have had trouble advancing past the NLDS in recent years, so something has to give in this series. Both teams have both strong pitching and lineups that are capable of putting up crooked numbers, so on paper these two teams are awfully hard to distinguish. However, with Washington’s biggest strength offensively being left-handed hitters Murphy and Harper, both of whom are not necessarily 100% health wise, and the Dodgers potentially starting four left-handed pitchers in a five-game series, the edge goes to the Dodgers, who will advance to the NLCS.