"Mr. Price has been given the "Billy Walters treatment" by the betting establishments in the Las Vegas area, due to his distinct ability to pick winners and cost casinos millions."
Home
Baseball
Nationals Welcome Back Ryan Zimmerman From DL 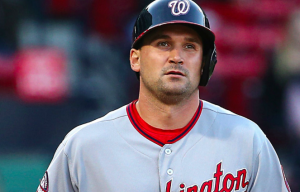 The Washing Nationals activated first baseman Ryan Zimmerman from the 15-day DL on Tuesday after missing nearly three weeks with a strained rib cage. Zimmerman is in the lineup for Washington’s game Tuesday against the Cleveland Indians. The Nationals are hoping to get a boost from Zimmerman for the stretch run.

Zimmerman is in the midst of one of the worst seasons of his career, as he’s hitting just .221 despite contributing 12 home runs and 13 doubles. The last month and a half before going on the DL was a particularly troubling time for the veteran, but after getting a couple weeks off and collecting five hits, including a three-run home run, in three minor league rehab games, Zimmerman says he “feels good” and is ready to rejoin the Nationals. “I didn’t take that much time off, but it was good to get down there and get some at bats and be ready to come back and help this team kind of in the second half and get going,” he said.

Washington manager Dusty Baker also has a positive outlook for Zimmerman’s return despite his struggles earlier this season. “I’ve seen guys that were cold when they left that were hot when they come back because they cleared their head, they get to watch other guys,” Baker explained. The skipper says he urged Zimmerman to stay in the game mentally. “‘Imagine yourself at the plate,’ and the mind is a wonderful thing. You have to sometimes play it in your mind before you get out there,” Baker said.

The return of Zimmerman is not the only change in Washington’s lineup. To make room for Zimmerman on the active roster, the Nationals optioned center fielder Michael Taylor to triple-A. Washington has been frustrated by the lack of production from the center field combination of Taylor and Ben Revere this season, and so with Taylor out of the picture for now, the Nationals will experiment with shortstop Trea Turner in center field, as he will make his first big league starter in center field Tuesday night. Turner has been productive in limited action in the majors this season, and the Nationals are at least curious whether he can be productive while playing every day and play competent defense.

With Zimmerman returning and Turner perhaps becoming a regular, Washington’s lineup will have a new look and feel moving forward. If both players are able to produce, the Nationals will have a much deeper lineup, as well as two more right-handed hitters to help balance out left-hand hitters Bryce Harper and Daniel Murphy, who have been Washington’s two biggest offensive stars this year. Of course, both Zimmerman and Turner both have plenty to prove, as Zimmerman has struggled this year and Turner is a young player who’s still unproven in the majors.

At the moment, the Nationals are in good shape, leading both the New York Mets and Miami Marlins by five games atop the NL East. However, their fate is far from secure with a little more than two months left in the season. Washington is hoping that the return of Zimmerman from the DL and the move of Turner to the outfield can make a meaningful impact and help them lock up a postseason spot.