This one has to hurt for fans of the Indiana Pacers. Their team wasn’t just up at halftime—they were killing the Cleveland Cavaliers. The 74-points the Pacers scored were the most a LeBron James team had ever given up in a half during the post season. Things were definitely looking good for Indiana.

Paul George only managed two points in the first quarter; one that saw Indiana take a ten-point lead. But he blew up in the second quarter (21 points) and led the team to a 74-49 lead at the break.

Then the second half started and it all went down the drain for the Pacers.

No team had overcome a 25-point halftime deficit in the playoffs—until Thursday night. LeBron James led the Cavs on what ended up being a historic comeback that started with his team outscoring the Pacers 35-17 in the third period. James chipped in 13 points to help Cleveland close the gap to 91-84 going into the final period.

After making only five of 26 shots in the third period, the Pacers desperately needed to find some offense if they were going to salvage a win. While they did find a little more than they had in the third (23 points relative to 17 in the third), they didn’t find any defense to go with it.

LeBron James tied the game up at 98-98 with a dunk five minutes into the period. Indiana managed to stay in the game up until the final minute when Channing Frye hit a three-pointer that put the Cavs up 114-107 with 54 seconds to play.

Indiana got within four after a CJ Miles dunk with 39 seconds left made the score 115-111 and within three (117-114) after he made a three-pointer with 15 seconds left. But Deron Williams ended the scoring with a pair of free throws to secure the win for Cleveland, 119-114.

James led the way with a triple-double, 41 points, 13 rebounds, and 12 assists. It was his 17th postseason triple double, second only to Magic Johnson (30). Kyrie Irving and Kevin Love struggled with their shots (4-12 and 4-17) and turned in 13 point nights.

Paul George ended the night an assist short of a triple-double (36 points, 15 rebounds, nine assists). As a team, the Pacers made 56.8 percent of their shots in the first half but shot only 25.5 percent (13-51) from the floor in the second half. After holding Cleveland to 36.7 percent shooting in the first half, the Pacers allowed them to shoot 55.2 percent (21-38) in the second. 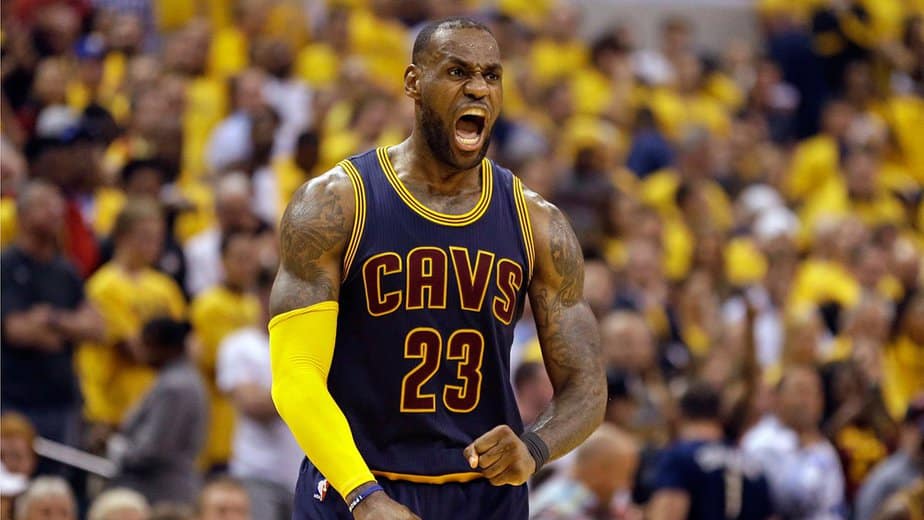 The Pacers have had a legitimate chance to win all three games—but that will only mean something to whoever they play in the next round. Cleveland’s issues from the regular season have continued in the playoffs. A better team than the Pacers would have been able to exploit them.

Indiana will get one more chance Sunday afternoon at 1 PM ET in Game Four.