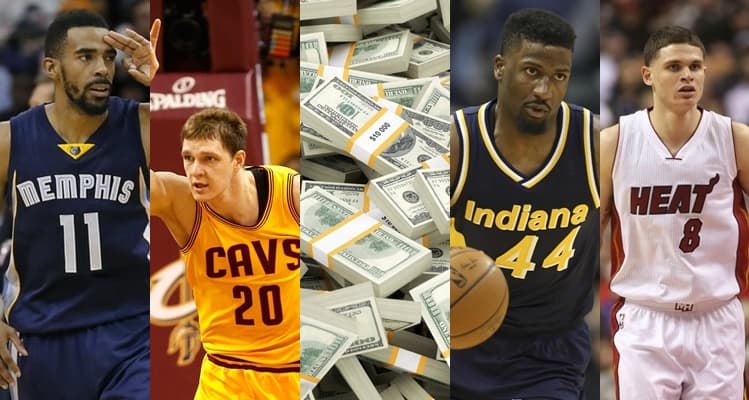 With the rise in the NBA’s salary cap fans and media types knew the kind of money involved would be insane. Sure enough—it was.

Players the casual fan has never heard of received contracts worth $18 million a season. Big name players switched teams and guys that barely played last season will make starter-type money next season. A player that has yet to make a single All-Star game became the owners of the largest contract in NBA history.

Over a billion dollars in contracts were agreed to on the first day alone. The insanity has yet to stop, but it has slowed down since the moratorium ended and players could start signing contracts. While every deal has not been signed yet, no one is expected to pull a DeAndre Jordan and change their mind.

Assuming everyone does sign, teams will have committed an incredible amount of money to 73 guys during the moratorium—a whopping $3.1 billion. Six players agreed to deals for over $100 million. The top ten alone, led by Memphis Grizzlies guard Mike Conley’s $152 million deal, agreed to contracts worth over $1.1 billion.

As crazy as the total amount of money is, what’s even crazier is how much of it was spent:

Conley is an excellent player, but is a guy that has yet to make the All-Star game worthy of the largest deal in NBA history? Yes and no. No, because he doesn’t have the resume to warrant such a deal. Yes, because he is very good and if the Grizzlies didn’t promise him the moon someone else would have.

You would think the largest deal in NBA history would belong to a different Mike or maybe a Kobe or LeBron, but it doesn’t–for now.

It should tell you something when a guy on an NBA Finals roster only played in 13 of his team’s 21 postseason games and averaged less than six minutes when he did play. Apparently, it told the Lakers to give him $16 million a season.

By NBA standards this deal is not extraordinary, but when Pittsburgh Steelers running back DeAngelo Williams said he had to Google who some of the NBA stars signing big deals are, Hill is probably one of them. Look at his stats and it’s not hard to see why. Over the course of his career, he is averaging just 20 minutes and six points a game.

So he’s barely played in three years, and when he has, he hasn’t done much. But in his last eight games, he hit 18 of 30 three-point shots. Whoever makes the decisions with the Pelicans must think he can do that all the time.

Talk about banking on potential. Johnson has played in only 68 games in the NBA after going undrafted a couple of years ago and averaged just 7.4 points and 21 minutes in those games (with only seven starts). How in the world do the Nets justify this deal?

If it wasn’t guaranteed, you could say it’s because they are paying him $5.6 and $5.8 million in the first two years and then $18.8 million and $19.6 million in the last two. If he doesn’t work out, they could cut him before the third year like an NFL team would (and call him a “salary cap casualty). But it is guaranteed so this one is a head scratcher. [UPDATED: As it turns out, the Heat were not deterred by the back-loaded contract and have decided to match the offer.]

The insanity of the contracts has received a lot of attention since role players and reserves are signing for more than many stars in the NFL. Of the 73 contracts (unrestricted free agents and offer sheets to restricted free agents), the average yearly salary is $14.12 million. That’s more than every starting running back in the NFL, all but three wide receivers, and every offensive lineman (except Terron Armstead).

But these deals pale in comparison to Major League Baseball. The top ten contracts in MLB have a combined value of $2.41 billion and an average length of nine years.

Next off-season, when the salary cap goes up to $102 million, we get to experience the insanity again–and there will be another superstar for everyone to go nuts over in Russell Westbrook!