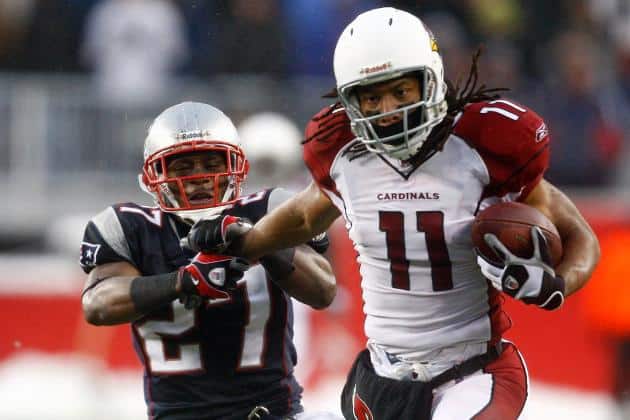 Sunday Night Football of Week 1 pits the New England Patriots against the Arizona Cardinals. While it’s still May, it’s never too early to get ready for the upcoming 2016 NFL season. Who has the best odds of coming away with a 1-0 record from this matchup? A preview and prediction are below.

This is clearly the marquee matchup of the Sunday slate (hence why it was made the Sunday night game), as two Super Bowl favorites go head-to-head. The big thing to watch in this one is if Tom Brady’s suspension is indeed upheld this time around. He’s expected to miss the first four games of the season, but that was also the case this time last year — as we’re still dealing with deflategate. Obviously, the outcome of this game will be impacted greatly by this, but let’s see how each team has changed this year.

New England didn’t have a first-round pick, but racked up quite a few middle rounders through trades. In fact, they had three third-round picks. That’s not too bad of a trade-off, all things considered.

The offense will be largely the same, other than the tweak of getting another stud tight end brought in with Bennett. He and Rob Gronkowski will form a duo as dangerous as Gronk and Aaron Hernandez (prior to when we find out the latter was a murderous gang member). They even have a pretty good third tight end in Harbor, who’ll no doubt be utilized in the backfield and elsewhere — he’s an excellent athlete.

But again, who will be throwing to those guys? More than likely, it’ll be Jimmy Garappolo. How good is he at this point in his career? I’m sure many fans are eager to find out, but no doubt would rather see Brady back there in a big-time, opening-week game.

The offensive line should be improved in 2016. The trade for Cooper and selection of Thuney in the third will help bolster the guard positions, which have been a bit weaker since Logan Mankins and others got older and moved on.

Trading for Cooper, though, brought upon the loss of Jones. This is a typical Bill Belichick move, as he’s getting rid of Jones in a contract year, in which he would have required a major deal to be brought back. Instead, they flipped him for a young, up-and-coming guard, along with a draft pick. Then they brought in Long on a cheap one-year deal, and they’ll get what’s left in his tank as a pass rusher to replace Jones. Not a bad move at all there.

Ultimately, the Pats are going to be a threat once again, with or without Brady for the first four games.

Arizona, on the other hand, didn’t have too much turnover.

Of course, they were on the opposite end of that Jones-Cooper deal. While it’ll hurt the offensive line just a tad (veteran Mathis will be a one-year stopgap), their 20th-ranked pass rush will get a much-needed boost. What that means is that a scary defense just got a lot scarier. The addition of Nkemdiche late in the first round of the draft means even more fear for opposing offenses to have heading into games each weak. He was a steal that late, and is almost made in the mold of a Darnell Dockett, at least frame-wise. Those are big shoes to fill, but he has the potential.

Offensively, the biggest concerns have to do with the age of some key contributors, such as Carson Palmer and Larry Fitzgerald. If those two guys are healthy and playing at a high level once again in 2016, the other pieces around them are more than good enough to have another terrific year.

John Brown, a healthy Michael Floyd and Fitz make up a dominant receiving corps. Jermaine Gresham is back at tight end. David Johnson could break through this year as one of the top backs in the league, as he was damn good in limited action last year.

All in all, the Cardinals didn’t have to change much, and they’re going to be just as good, if not better than they were a year ago when they won the NFC West and nearly punched their ticket to the Super Bowl. Bruce Arians has a phenomenal squad, but their window is closing fast with Palmer.

Prediction: The Cards and Pats are pretty evenly matched here, which is why Vegas hasn’t predicted a favorite, even with the Cardinals at home. That spread could change, however, if Brady’s suspension remains in place. Assuming that to be the case, Arizona should have a great shot stealing one against one of the best teams they’ll face all year. Take the under, as it’ll be a bit slower-paced game with Brady out, and Belichick not wanting to let Garappolo loose against a defense that loves to take the ball away.