Without Tom Brady, the New England Patriots were not supposed to be as good as fans have grown accustomed to their team being. They were not expected to be able to hang with a tough Arizona Cardinals team at all. There was every reason to think Jimmy Garopollo could play, but he was no Tom Brady.

So these guys would get beat by Carson Palmer and company in Arizona Sunday night—or at least that was what the sportsbooks in Vegas thought. They had Arizona as a 5.5-point favorite, but then Rob Gronkowski was ruled out—so now the Patriots were expected to get killed! 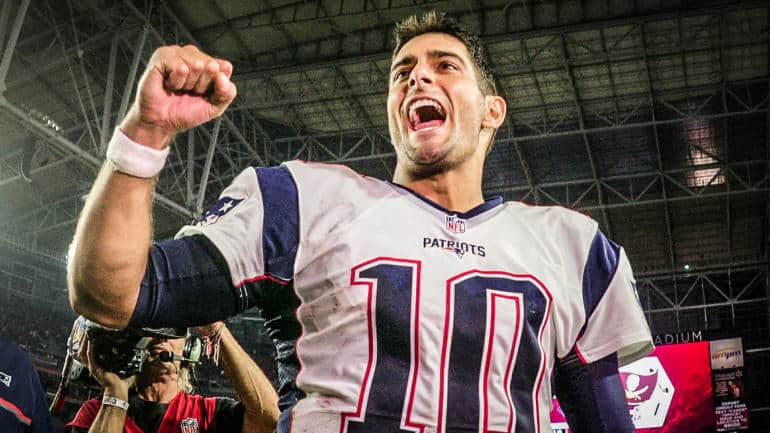 After Gronkowski had been ruled out, the spread increased to 9.5-points. Someone was favored over the New England Patriots by 9.5 points! How crazy was that?

What the sportsbooks thought was even crazier was the amount of money people were willing to wager against the Patriots in spite of the spread. With how the games earlier in the day played out, some of them needed the Patriots to cover or win in order not to lose their shirts.

One casino took four times as much money on the Cardinals as the Patriots. Another had 80 percent of the money bet favoring Arizona, and another had six figures of liability tied to the Cardinals (ESPN).

So—how did Jimmy Garopollo do in his first start? His first pass wasn’t even close to his target. He missed Chris Hogan by about ten feet.

“I get nervous before every game,” Garoppolo said later. “Whether if it’s little league, college or here. I think that’s a good thing, though. If you don’t get nervous, it doesn’t mean that much to you.”

Nervous? Seriously? Luckily, he didn’t stay nervous for long. Eight plays after he missed Hogan with his first attempt, he connected with him on a beautiful 37-yard touchdown pass to give the Patriots an early 7-0 lead.

Hmm…so far so good, but could it last? Could Jimmy G be the next great quarterback?

It’s way too early to anoint him as the next great one, but he certainly made a pretty good case for himself. The pass to Hogan would be his only touchdown pass of the night, but he looked pretty good behind a makeshift line and completed 24 of 33 passes for 264 yards.

“Jimmy made some really gutsy plays,” Patriots defensive end Chris Long said. “He has a quiet confidence, and everyone on this team was confident in him.”

It wasn’t all sunshine and roses of course. After getting sacked in the second quarter, he fumbled the ball. Arizona recovered and 11 plays later Carson Palmer hit Larry Fitzgerald in the end zone giving the longtime Cardinal receiver 99 career touchdowns (he would catch No. 100 in the fourth quarter to give Arizona a 21-20 lead).

At this point in the night, the sportsbooks were probably breathing a lot easier. A lot would have to happen for the Cardinals to cover the spread with less than ten minutes to play and New England with the ball. But could the Patriots pull out the win? Garoppolo played well, but does he have what it takes to lead a clutch fourth quarter drive?

As it turns out—yes. But the fun wasn’t over when Stephen Gostowski booted a 32-yard field goal through the uprights. Carson Palmer just under four minutes on the clock to work with. With the talent at his disposal, it would not be shocking for the veteran to lead Arizona on a game-winning drive.

And he nearly did.

Palmer got Chandler Catanzaro within range of a makeable field goal from 47-yards out. Having made 16 of 18 attempts from 40-49 yards out, there as every reason to believe he could make it, and maybe he would have had the snap not been low and the holder able to place the ball properly.

With the win, the sportsbooks were able to smile, and Patriots fans had reason to celebrate. Maybe their team could be 4-0 when Tom Brady returns. After watching how well Garoppolo handled the Cardinals, there is no reason to think he can’t run the table.

With the fight Miami gave Seattle Sunday, the Dolphins might be a challenge, but a beatable one. Houston will certainly not make it easy, but the Texans will still be working the kinks out of their offense.

Buffalo—well, the Bills were a train wreck Sunday.

Garoppolo will sit when Tom Brady returns; a move no one will really question. But with Tom Brady turning 40 next August, the team has to be ready for life without Brady no matter how long he thinks he can play.

After next season, Garoppolo will become a free agent. If the Patriots don’t pay him, someone will throw him a deal similar to the one the Texans gave Brock Osweiler. But with Brady under contract through 2019, will they be willing to pay Garoppolo enough to keep him?