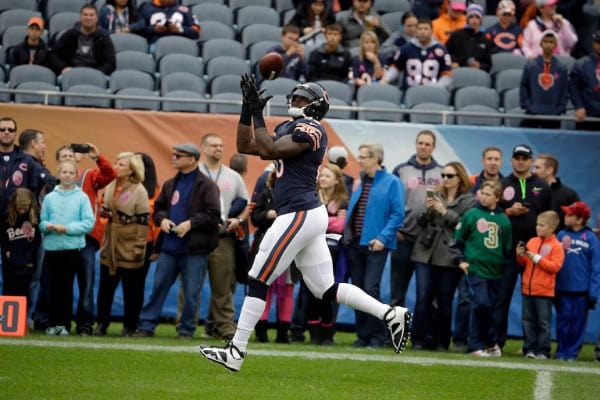 The New England Patriots are the top Super Bowl favorites once again heading into the 2016 NFL season. As 8:1 odds-on favorites, they prepare this offseason. The big question surrounding the start of their campaign undoubtedly revolves around the Tom Brady suspension — whether it is upheld or not — but from a whole-season perspective, what gives this team a great chance at success is the presence of Rob Gronkowski and Martellus Bennett as a tight end duo.

Bennett was traded for earlier this offseason from the Chicago Bears. The price the Patriots paid was a as simply as swapping a fourth-round pick for a sixth, and the Pro Bowl tight end was their’s.

What Bennett brings to the table is that second tight end that the Patriots love to utilize, which has been tried and failed time and time again ever since Aaron Hernandez was cut because of his serious crimes. But, for the three years (2010-12) that the Pats had Hernandez and Gronk on the same team for Brady to work with, the offense was absolutely dominant. Brady threw for 34-plus touchdowns each year, and out of those 109 total touchdown passes, one of those two tight ends were on the receiving end 56 times. In total, they accounted for 362 receptions and 4,619 yards to go along with those scores.

In fact, Bennett may offer even more versatility than Hernandez as well. Not only is Bennett close to the former pro’s receiving level, but he’s a much bigger and better blocker for the Pats to use. Whether they are running or passing, having Bennett and Gronk on the field at the same time makes the whole unit better.

This acquisition comes at a perfect time as well. Outside of Gronk, Julian Edelman and occasionally Danny Amendola, the Pats don’t have many proven commodities for Brady to throw to. Having that dynamic 1-2 punch at tight end will give this offense the firepower it would otherwise lack, and more options in the red zone.

While Bennett has been accustomed to being the No. 1 tight end ever since leaving the Dallas Cowboys as Jason Witten’s backup, he’s ready to step in as “Robin” to Gronk’s Batman.

“I’m super excited about it because it takes a little pressure off of me too,” Bennett said, per CSN New England. “I really don’t mind being Robin, you know? So right now it’s just working every day and just trying to get better. He’s an excellent player, and I’m gonna be able to get a lot of single coverages with him.”

That he will. Gronk running down the seam is going to attract two or three defends every time, which means underneath throws will be easy picks for Brady and Bennett.

All that said, Bennett is a bit of a head case. He’s had his struggles throughout his career, and sort of lost his confidence and standing with the Bears last season. After a strong start, Bennett had some criticisms for Jay Cutler, and soon after struggled mightily to hold on to the football. The emergence of Zach Miller for the Bears made him expendable, even though he’d been an excellent weapon for their offense the two seasons prior.

Ultimately, that led to him being put on the block, which the Pats took advantage of.

New England, and Brady in particular, is hungry for another chance at a championship, and Super Bowl LI is as good as any to get that. He’s won four of six Super Bowl appearances, and has a solid team surrounding him once again in 2016.

Offensively, they traded for Jonathan Cooper and drafted another guard in Joe Thuney. Nate Solder and Sebastian Vullmer will be at the tackle spots, making for a pretty solid offensive line regardless of who ends up starting at center. Lagarrette Blount and Dion Lewis will once again man the majority of the snaps at running back, and even if Brady doesn’t play the first four game, Jimmy Garappolo should be able to win them at least a couple of games.

Defensively, the trade for Cooper came at a price, as they traded away Chandler Jones. Without their top sack man, Jabaal Sheard, Rob Ninkovich and Chris Long to get after the quarterback, and they also brought in Terrance Knighton to likely play the nose. New England still has Dont’a Hightower and Jamie Collins at linebacker, and Malcolm Butler and Devin McCourty in the secondary.

Both units will be solid again, and the offense has a chance to be pretty special; and a large part of that will be the Caped Crusaders, Gronk and Bennett.