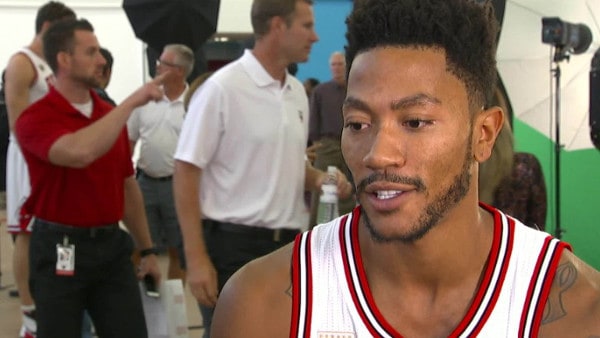 The latest on the NBA rumor mill as we edge closer to the 2016 NBA Draft is that the New York Knicks appear to be having internal discussions with the Chicago Bulls, with a specific interest in point guard Derrick Rose. The former MVP, 27, has one year left on his max contract worth just over $21 million. That’s quite a salary to take on, especially with Carmelo Anthony’s max deal on the books, so how likely a possibility could this be?

Reports stem from ESPN.com’s Ian Begley according to Bleacher Report, saying that head coach Jeff Hornacek and GM Steve Mills are specifically thinking about Rose as a primary target to upgrade the point guard position.

While the Bulls appear open to trading Rose, other reports suggest that Jimmy Butler is also available. Perhaps that holds merit to the idea that Rose and Butler simply don’t mesh to well on the court together. Watching their games last season, that would hold true. Odds are, though, that Gar Forman and John Paxson would prefer to only move one or the other, depending upon what the team could receive in return, respectively.

So what do the Knicks have to offer?

The Bulls would like to add talent, but caps space is also a luxury they don’t have perhaps as much as they’d like of at this point in time, even with the cap ceiling rising. Players like Jose Calderon, Derrick Williams, Kyle O’Quinn and Jerian Grant are all pieces who could have some value as role players, especially O’Quinn, who is an excellent rebounder. As far as draft picks are concerned, New York traded their 2016 first-round selection to the Denver Nuggets, which ended up being No. 7 overall. That obviously doesn’t help in this case, but they still own their 2017 and 2018 first-round picks; both of which would hold value in this type of deal.

If Chicago were to be interested in making a deal with the Knicks, the Bulls would be a making a move that a) opened cap space and b) gave them future first-round picks in the next year and/or two. All in all, it would really depend upon what those future picks turn into that would make the deal a productive one for the Bulls.

For example, a potential trade could look like this: Rose for Calderon, O’Quinn, 2017 first and 2018 first. The Bulls would get a young rebounder, one-year replacement and downgrade at point guard and two future picks. The only way this deal is worth it is if those two draft picks are then flipped for other proven players, or end up being lottery picks. But, would a team with a starting lineup that included Rose, Arron Afflalo, Melo, Kristaps Porzingis and Robin Lopez likely end up in the lottery?

Meanwhile, the rumors surrounding a trade for Butler appear to be much more likely. The Minnesota Timberwolves are a potential destination with Tom Thibodeau interested in acquiring him, and Andrew Wiggins could potentially be involved in a swap for Butler straight up, or other assets like the No. 5 pick in this year’s draft, Zach Lavine, Gorgui Dieng, Tyus Jones and other future firsts could be available.

All in all, trading Butler would be more profitable for the Bulls than Rose. But if all else fails, moving one of these two guys may be a top priority of the front office to improve the chemistry of the roster.

New York, of course, would love to do this deal if they can. As previously mentioned, that potential starting lineup could be a lethal one in an Eastern Conference that really only has one legitimate threat in the Cleveland Cavaliers. It’s been a while since the Knicks were a consistent playoff team, other than the one aberration that was 2012-13 where they won 54 games. It will be tough for New York to be legitimate trade partners with anyone this offseason, though, considering they don’t have many assets in terms of young players or picks. Instead, free agency may be the route they need to test and push hard in to acquire the talent necessary for a playoff run.