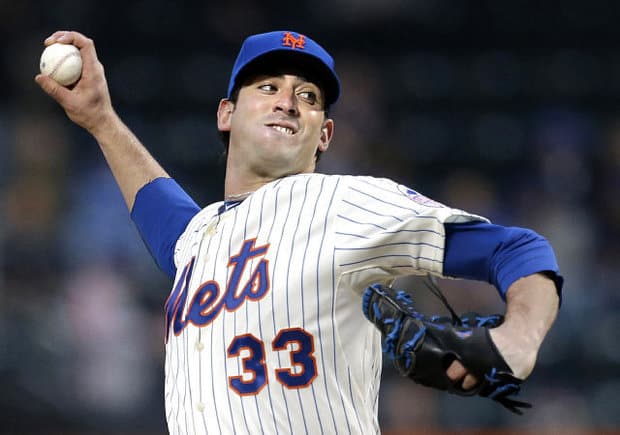 Last week, when Matt Harvey got knocked out in the third inning by the Washington Nationals, the New York Mets considered skipping his next start, or even setting everything in his locker on fire, to help their ace get back on track. Harvey declined the option to be skipped, but after another poor outing against the same Nationals team, the Mets almost certainly need to do something, and it appears that they will.

It wasn’t all bad for Harvey Tuesday night, as his velocity was up from previous starts. He also managed to traverse Washington’s lineup the first time through unscathed. However, he allowed back-to-back home runs during his second run through the lineup, and then, as has become customary, was disastrous the third time through the order. Ultimately, Harvey pitched five innings, allowing five runs on eight hits, including three home runs. He has now lost he last three starts and holds an ERA of 6.08.

To make matters worse, Harvey left the stadium after the game without talking to the media, a stark contrast to a day earlier when Harvey proclaimed, “I’m not a quitter.” The Mets also declined to make pitching coach Dan Warthen available to the media, leaving manager Terry Collins to handle each and every question about what went wrong and what’s next for Harvey.

Collins says he will soon discuss Harvey’s situation with Warthen and GM Sandy Alderson. “Right now we’ve got to think what’s not just best for Matt, but what’s best for us moving forward at the moment,” Collins said after the game. “There’s a lot of things to consider. That’s why we’re not going to make any rash judgments tonight. We’re going to sleep on it and talk about it tomorrow.” If he were to remain on schedule, Harvey would pitch again Monday at home against the Chicago White Sox.

Collins said the game plan Tuesday night was for Harvey to use his fastball more, and the team was initially encouraged early by his velocity. However, the first two home runs he gave up came on changeups, and afterwards the manager noted that Harvey’s delivery was “different” and his velocity started to come down, perhaps signaling a loss of confidence.

The Mets’ skipper continues to bring up the fact that Harvey threw 216 innings in 2015 in his first season back from Tommy John surgery as a possible reason for his struggles. He also mentioned that Harvey threw a 65-pitch simulated game between starts, which he says could account for his fatigue in the middle innings Tuesday.

But more than anything, Collins says he’s surprised at Harvey’s continued struggles. “This guy is too good. He’s just way too good to continue like this,” he said. Collins adds, “My experience says it takes a little time and it’ll come back.” But the Mets are running out of time for Harvey to figure things out without taking him out of the rotation, which is an option that’s definitely on the table at this point.