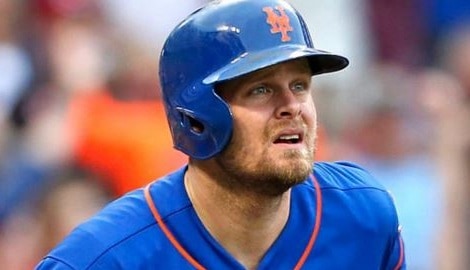 On Saturday, first baseman Lucas Duda was scratched from the New York Mets’ lineup for the third time in the last five games with back issues. Duda will also be absent from the team’s starting lineup on Sunday, as the Mets go for the sweep of the Milwaukee Brewers, and it’s obvious that the team is starting to worry.

Earlier in the week, Duda received an anti-inflammatory injection after a stiff back kept him from playing Tuesday and Wednesday against the Washington Nationals. Duda was able to play Thursday and Friday, going 1 for 7 with three strikeouts. However, he was out of the lineup again on Saturday, prompting him to receive an MRI and be examined by a doctor. He is scheduled to sit a few more days before being re-evaluated, with a trip to the DL being on the table. However, manager Terry Collins says it’s still too early to speculate on how long he’ll be out.

“We have to look at the big picture. We can’t aggravate this thing to where it becomes a major issue. We hope that it won’t,” said Collins on Saturday. At the same time, Collins says that the Mets can’t afford to have him out of the lineup for too long, saying, “Having him out of the lineup is a huge loss for us, especially against right-handed pitching.” The Mets are expecting to face at least a couple right-handed pitchers in an important series against the Nationals that starts Monday.

The Mets have little depth at first base, with utility man Eric Campbell filling in at the moment, although he is hitting .231 with just one extra-base hit this season. Wilmer Flores is also an option at first base, despite little experience playing the position in the majors. Of course, Flores is currently in the DL and not available to return until Friday. The Mets have no obvious option in triple-A to come up and play first base regularly if Duda ends up going on the DL.

Duda’s back issues are further complicated by David Wright’s back condition, which is managed on a day-to-day basis. Both Flores and Campbell are needed to relieve Wright at third base on days he doesn’t play, creating problems for the Mets on days when both Wright and Duda sit, especially with both of them still taking up a spot on the roster.

Until the Mets know more about Duda’s long-term status and whether a trip to the DL is necessary, they will have to tread lightly. Duda has hit just .231 this year, but his seven home runs make him a key power source for New York, which is why it’s no wonder the Mets are so concerned about his health.