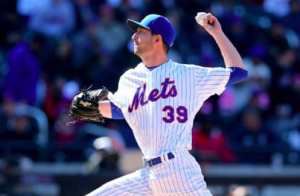 After months of inaction in terms of addressing their need in the bullpen, the New York Mets are making up for loss time. Mere hours after the team agreed to re-sign Fernando Salas and bring in veteran lefty Tom Gorzelanny on a minor league deal, the Mets agreed to re-sign lefty Jerry Blevins, who has been one of their top bullpen targets throughout the offseason. Blevins will reportedly earn $6.5 million in 2017, and his deal includes a club option for the 2018 season that could the contract to be worth a total of $12.5 million plus incentives.

Of course, the Mets showing patience in their pursuit of bullpen help seems to have paid off in the end. At the start of the offseason, Blevins was said to be seeking a three- or four-year deal, similar to the one Mike Dunn signed with the Colorado Rockies for three years and $19 million. But the Mets waited for the market to come back to them, and it worked in the case of both Salas and Blevins. New York was able to re-sign both without making a long-term commitment. The Mets were also able to sign both without having to free up money by trading an outfielder, which is a surprise to most.

Blevins first came to the Mets prior to the 2015 season, and he’s been one of the best left-handed setup men in baseball ever since. He threw five shutout innings at the start of the 2015 season before breaking his arm and being lost for the season. However, he bounced back nicely in 2016, posting a .279 ERA in 73 appearances. Oddly enough, right-handed hitters had a lower batting average against him than lefties, as Blevins showed the versatility to be more than just a lefty specialist.

With Blevins returning, the Mets are likely finished addressing their bullpen this offseason. Jeurys Familia is the undisputed closer and there’s no doubt that Addison Reed will serve as the team’s top set-up man. Blevins and Salas are next in the pecking order in terms of set-up men, with Hansel Robles also in line for a prominent role. Those five should give the Mets enough depth in the back end of their bullpen.

This leaves two empty spots in New York’s bullpen heading into spring training. Gorzelanny, Josh Edgin, and Josh Smoker are all candidates if the Mets want to carry a second lefty to complement Blevins. Erik Goeddel is also in good shape to earn one of the remaining spots, although the Mets have several pitchers who could compete for a bullpen role rather than provide rotation depth at triple-A, including Robert Gsellman, Seth Lugo, and Rafael Montero.

All things considered, the Mets have done quite well to re-sign Blevins for the price they did. They needed to sign a reliever of his quality at some point this offseason, and to do so without overspending or committing to a long-term deal is a huge win. Most importantly, it puts New York’s bullpen in good shape heading into the season.