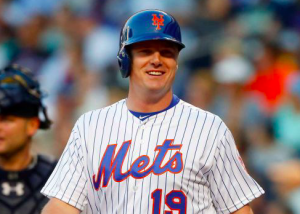 Ever since the New York Mets re-signed Yoenis Cespedes to a four-year deal early in November, they have been actively trying to trade right fielder Jay Bruce. It’s no secret that the Mets are trying to unload Bruce, but the market simply hasn’t been there, making a trade virtually impossible. For the first time all winter, the Mets may be coming to the realization that they won’t be able to trade Bruce before the start of spring training, a stark contrast to what the club has believed all winter.

The Mets acquired Bruce at the trade deadline last season, giving up heralded second base prospect Dilson Herrera to get him. They added Bruce to give them a boost during the stretch run and provide a bit of insurance for 2017 in case they weren’t able to re-sign Cespedes. When Cespedes did commit to spending four more years in New York playing left field, the Mets immediate plan was to trade Bruce, expecting Curtis Granderson, Juan Lagares, and Michael Conforto to cover the other two outfield positions.

However, with the free agent market flooded with power hitters, many of whom are struggling to find lucrative, long-term deals, there’s been little interest from teams in trading for Bruce, at least with so many players still available as free agents. While speaking with reporters on Thursday, Mets GM Sandy Alderson described the free agent market as being “slow” and nonexistent,” adding that the club would be re-evaluating its options with regard to trading one of its outfielders, most notably Bruce.

It’s believed that the Mets would prefer to acquire a major league caliber relief pitcher in a trade for Bruce, who will make $13 million in 2017 before hitting the free agent market, rather than prospects. But as it stands, the Mets may not be able to get exactly what they want in a deal involving Bruce. It’s also looking more likely that the Mets would have to pick up at least a portion of Bruce’s salary in order to make a deal, which is not something the team expected to have to do earlier in the offseason.

If the market for Bruce doesn’t improve in short order, the Mets may be forced to keep him heading into the season. The question would then become where Bruce would play. Cespedes is locked into left field and Granderson and Lagares are expected to split duties in center field. This would leave Bruce and Conforto, both left-handed hitters, to share right field. It’s expected that the Mets would give Conforto every opportunity to prove himself as an every day player, relegating Bruce to a bench role, which is not idea for him or the Mets.

If there’s a silver lining, it’s that the veteran said in a recent interview that he understands the situation the Mets are in and knows they have to do what’s best for the team. “I would love to come back,” Bruce said about staying with the Mets, but adds, “I’ll be ready to play baseball and report to spring training whether it’s with the Mets or someone else.”

All hope is not lost, as teams like the Blue Jays, Orioles, Mariners, and Phillies could all be potential suitors for Bruce on the trade market. However, until free agents like Mark Trumbo, Mike Napoli, Jose Bautista, and Michael Saunders sign with a team, it’s unlikely any team will get serious about trading for Bruce. The longer it takes for that to happen, the more the Mets are forced to consider the possibility of keeping Bruce around in 2017.