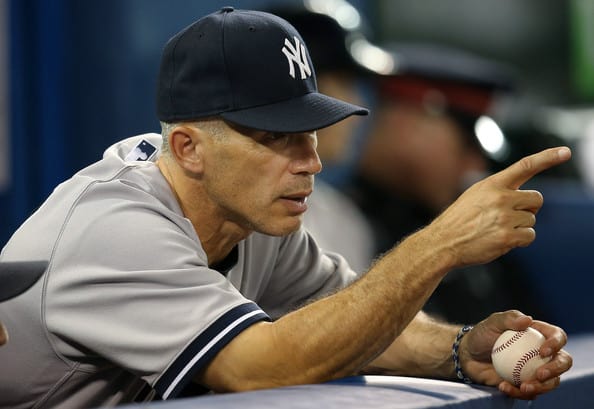 The New York Yankees have to be one of the most disappointing teams in baseball this season. After their win Wednesday night to avoid getting swept at the hands of the Arizona Diamondbacks, the Yankees are just 17-22 on the season and last in the AL East, 7.5 games behind the first place Baltimore Orioles. Conventional wisdom tells us that manager Joe Girardi could be on the hot seat if the Yankees don’t turn things around, but perhaps not.

Speaking before Wednesday’s game, owner Hal Steinbrenner gave Girardi a vote of confidence, sort of, as he pinned blame for the team’s lackluster performance solely on the players. Steinbrenner didn’t exactly praise Girardi, but he did say, “The coaches are doing a great job.” He then proceeded to put it all on the players, saying, “These are professional athletes. They’re the best baseball players in the world, and sooner or later it comes down to them, on the inside, to push through whatever it is they’re going through and to persevere.”

Steinbrenner had no problem singling out a few players from the crowd, most notably first baseman Mark Teixeira. “When you look at a guy like Mark Teixeira, clearly, he’s not playing to his potential with the bat,” said Steinbrenner. Teixeria went 0 for 5 Wednesday, striking out three times, dropping his season average to .203.

To his credit, Teixeira admitted his faults after the game while responding to Steinbrenner’s comments. “I’ve been terrible the last month. I’ve been around long enough to know that you’re going to get singled out when you’re not producing, especially the type of career that I’ve had. I’ve always been someone that’s been able to carry teams during tough streaks. We’ve been in a tough stretch the whole season. I’m the kind of player that can carry a team for a while. I just haven’t done it yet,” said Teixeira.

Pitchers Luis Severino and Michael Pineda were also singled out by Steinbrenner. “All these strikeouts, and yet he’s given up these runs,” the owner said regarding Pineda, who currently owns a 6.60 ERA. The owner went on to say, “He’s a professional, and that’s what we expect from him, and that’s what his teammates expect from him.” With Severino, who has a 7.46 ERA and was placed on the DL last week, Steinbrenner boiled his struggles down to a “confidence issue” and says the 22-year old must “learn how to push through that downturn.”

The Yankee owner did have plenty of good things to say about players like Starlin Castro and Aaron Hicks, as well as Girardi and the coaching staff. However, overall he’s disappointed with the team’s play this season. “The first five weeks were disappointing, frustrating, particularly looking at the offense,” he said, adding that the team is “Clearly not living up to their potential.”

Steinbrenner is not giving up and contends that the Yankees have a chance to turn things around, saying, “I think the team we have this year is better than the team we had last year.” Last year’s team earned the chance to play at least one postseason game, and if the Yankees want to match or exceed that this season, they have a long ways to go.