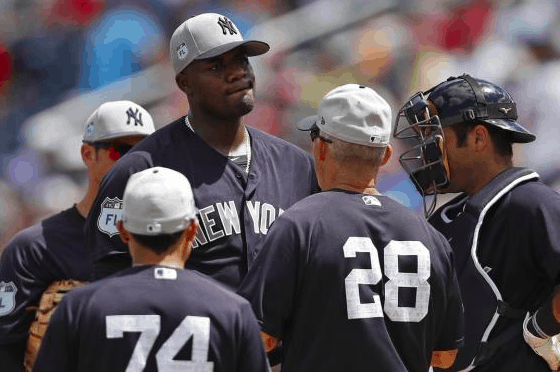 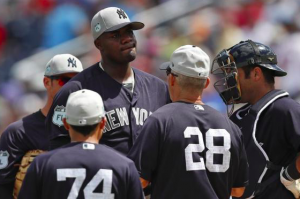 At the start of spring training, the New York Yankees starting rotation was one of the team’s biggest question marks, and less than two weeks until opening day, little has changed. To be fair, Masahiro Tanaka has been brilliant this spring, potentially giving the Yankees a bonafide ace in front of C.C. Sabathia and Michael Pineda. However, the final two spots in New York’s rotation are as unsettled now as they were at the start of spring training. The team assumed at least a couple pitchers would assert themselves over the course of the spring, but that has not been the case thus far.

“It’s not really ironing out that way,” Yankees manager Girardi says of pitchers earning spots during the spring season. “Your hope was you’d have two guys step up, clear-cut, dominate. It hasn’t been that way. There’s been some inconsistencies that you have to deal with. It’s still pretty wide open.”

The most disappointing pitcher involved in the competition has been Luis Severino. Many assumed he would lock down the no. 4 spot in the rotation, as he’s flashed high-end talent early in his career. However, Severino has posted a 5.06 ERA this spring and struggled with his control, leading the Yankees to think he may not be ready for a full-time job in the starting rotation.

“Sevvy has a lot of ability, but you have to maintain consistency at this level,” Girardi said of Severino. “You have to be able to slow things down and relax. There’s pressure pitching in New York.”

Things haven’t been much better for the trio of Luis Cessa, Adam Warren, and Bryan Mitchell, who could all find themselves in either triple-A or pitching out of the bullpen if they don’t make a statement late in spring. Cessa has been roughed up to the tune of a 6.52 ERA, making him a long shot to crack the rotation at this point. Warren may be best served in the bullpen, as the Yankees know he can be moved to a starting role if necessary. Mitchell, meanwhile, hasn’t quite dominated with a 3.86 ERA, but he has drawn some attention with a high strikeout rate this spring.

If any pitcher has stood out the most, it may be Chad Green, who has produced a 1.50 ERA over 12 innings this spring. However, Green struggled as a starter with the Yankees last season and was far more effective in four relief outings with the club.

Finally, prospect Jordan Montgomery may have pitched his way into the competition after not necessarily being on the radar at the start of spring. The lefty was part of the no-hitter the team had in Tanaka’s start last week and has managed to catch the eye of Girardi and other members of the Yankees brass with a 3.68 ERA this spring.

Among those six candidates, the Yankees need to find at least one to start the season in the rotation, as they don’t necessarily need a fifth starter until midway through April. Nevertheless, they’ll eventually need at least two starters from that group of six in the rotation, and they have just seven spring training games left for the group to audition. Even with so little time left, the Yankees aren’t sure which way they’re leaning.

“I wouldn’t say (there are) favorites, no,” said Yankees GM Cashman about the competition. “I think the competition is still going on. This is the type of competition — listen, we have a number of different guys potentially in the same category that maybe this is a competition that continues throughout.”

Most of the six pitchers competing for the final two rotation spots are likely to start games for the Yankees at some point this season. However, it’s not a good sign that the club doesn’t have clarity on 40% of its starting rotation this close to the season. Not having that clarity only adds to the question marks surrounding the team’s rotation this late in the spring.