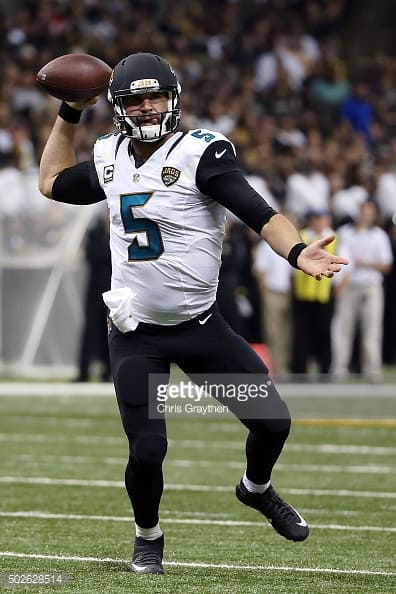 To make this one a little less ridiculous than the rest of these lists, they polled players to develop the rankings. That way when people complain about where certain guys are ranked the commentators can blame the players

For example, when Jacksonville Jaguars quarterback Blake Bortles was announced recently as No. 56 on the list, many people scoffed. Bortles No. 56? While Andrew Luck is No. 92?

As Chad Johnson would say—child, please.

Luck led his team to the postseason in each of his first three seasons and got within a game of the Super Bowl in 2014.

Bortles, on the other hand, has only won eight games in two seasons, and his mistakes have been the cause of some the team’s losses over the last couple seasons. Since entering the league in 2014, he has thrown 35 interceptions and fumbled the ball 12 times.

Well—before last season, the image players had of Andrew Luck was a guy that played a legendary half of football to come from behind and beat the Kansas City Chiefs in the Wildcard game the year before. Yes, they eventually lost to the Patriots in the AFC Championship, but no one expected them to win that game.

This time, the image they had of Luck was a guy that missed most of the season with an injury but did not look very good before he was hurt. However, in Bortles, they saw a guy that went from throwing 11 touchdowns as a rookie to 35 last season. Yes, he did throw a league-high 18 interceptions last year, but he still managed to throw for over 4400 yards in spite of them.

Many of the critics like to point at Bortles interception numbers when criticizing his rank, but with 12 picks in seven games, Luck was on pace to throw 27 last season. So he certainly wasn’t any better.

If you point to their win-loss records, Luck was 2-5 in the seven games he played in last season–just like Bortles was in the same seven.

That’s not too different than Luck.

An argument could be made that the two should at least be much closer in the ranks than they are, but there is likely an excellent reason why the players voted the way they did. Bortles and the Jaguars have much more potential than the Colts do.

Luck has not looked as good without Reggie Wayne in the lineup. T.Y. Hilton has become a solid No. 1 threat, but the Colts have yet to develop a solid No. 2 for Luck to throw to (but hope Donte Moncrief could be the guy). Frank Gore was great in San Francisco, but he is far from great now.

Blake Bortles and the Jaguars appear to have a ton of potential. T. J. Yeldon showed potential at running back last season and will get a helping hand next season from Chris Ivory. Allen Robinson and Allen Hurns became the dynamic duo last season and will benefit from a healthy Julius Thomas being in the lineup all season.

The bottom line is Luck has lost his shine. The critics can cry all they want about Luck’s great comebacks, but Bortles has some too. When it comes down to it, the league is all about what you have done lately—not two years ago.

Lately, Blake Bortles has looked like he is on the up and up. Andrew Luck—not so much.