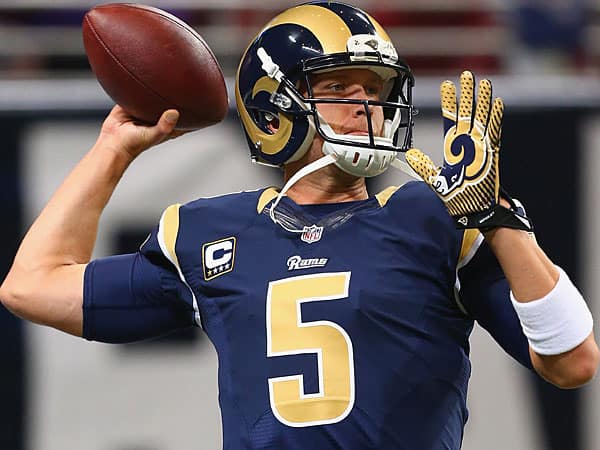 Nick Foles is an idiot. He has to know that this time in Los Angeles is all but done after the Rams drafted Jared Goff. Should he be happy about it? No, but pouting like a petulant child is not going to do him any good.

The Rams started OTA’s recently, but Foles—who is now in a dogfight for the backup role—decided not to show up. Why? No one other than Foles knows for certain, but ESPN is reporting that it is because the team drafted Goff–and that has upset Foles.

A smart person would be doing everything in his power to prove that his struggles last season are done and over with—but not Foles. Yes, the Rams traded for him and foolishly signed him to a two-year extension worth $24.54 million with over $13 million guaranteed.

But it doesn’t matter how much you are getting paid when you play as bad as he did during last season (56.4 percent completion percentage, 2052 yards, seven touchdowns, ten interceptions).

Case Keenum didn’t exactly light it up, but he did lead the team to three wins in five games.

Foles, or at least his agent, has to know that there is an excellent chance he will be cut before training camp ends if not sooner. Case Keenum is already the starter. Since he will not have to split first-team reps anytime soon, chances are he is only going to get better.

So by skipping workouts, Foles is only making it easier for the Rams to justify cutting him loose.

Maybe Foles and his agent are counting on teams remembering what he did during his second season. At that time, it appeared as if Foles was going to have a pretty good career. He had a brilliant 2013 campaign that saw him throw 27 touchdown passes and only two interceptions (first in Week 14).

The following season saw him come back down to Earth a bit. His injury shortened 2014 season didn’t look nearly as good (13 touchdown passes, ten interceptions in eight games)—but was it because the NFL had figured Chip Kelly’s offense out or because Foles had become predictable?

What Foles needs to realize is that it doesn’t matter. The NFL uses a “What have you done for me lately?” type of mentality. No one is going to care that Foles looked like the next great quarterback during the 2013 season. They are only going to be interested in how he looks right now.

The last time they saw him play, he was benched for an undrafted free agent. Rather than try to work his way back into the good graces of his coaching staff, he pouted like a temperamental child and stayed home.

Had he attended workouts and appeared willing to work on his game maybe someone would be open to giving him a shot after the Rams finally cut him. Maybe they would remember his stellar 2013 season and believe Foles might be able to play like that again with the right coaching and personnel.

However, since he has opted to stay home, the last image teams are going to have is that of a flash in the pan that is afraid to work or compete when his back is against the wall.