Nolan Arenado Could Play for Puerto Rico in 2017 WBC 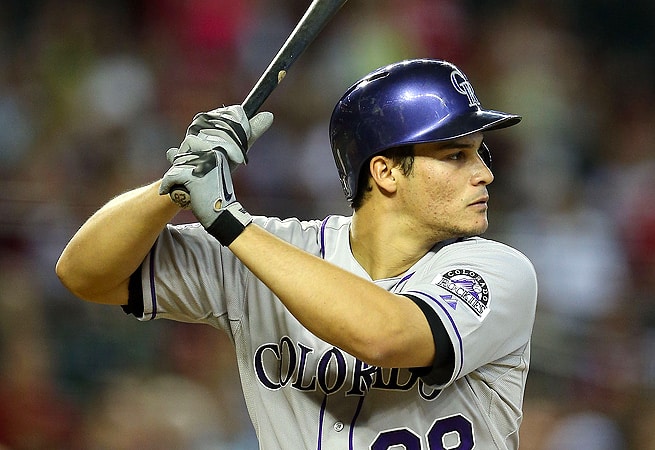 One of baseball’s best young stars may be about to shake up the 2017 World Baseball Classic. Colorado Rockies’ third baseman Nolan Arenado is mulling over his options with regard to what country he will represent, suggesting that he may opt to play for Puerto Rico, the homeland of his maternal grandmother.

Under the current rules, Arenado is eligible to play for the United States and Cuba, as his mother was born in New York and his father was born in Cuba. However, players may be eligible to play for a country where a grandparent or great-grandparent was born if they submit a request to Major League Baseball, which makes those decisions on a case-by-case basis, opening the door for Arenado to choose Puerto Rico.

“Playing in the World Baseball Classic is something that I truly want to do,” Arenado says. The 25-year old all-star also appears to have done his homework on the subject. “I have already looked at [Puerto Rico’s] lineup and I think it would be pretty cool to be a part of it.”

However, the third baseman says that family will determine his ultimate choice more than his spot in the lineup. “I am talking it over with my family and we still haven’t decided what we are going to do,” adding, “for me it’s all about family, that I represent them the right way. That’s what’s most important to me.”

Arenado actually credits his family and Latin roots with much of his big league success. “Growing up in a Latin family has given me my charisma out there, my swag,” he explains. “I try to be very confident, and I get that from my family. They enjoy and take pride in what they do; I get that from them. That’s the way we are, even playing Wiffle ball!”

It’s possible that Arenado’s choice could be, at least in part, made for him, with Cuba being taken out of contention. Antonio Becali, president of Cuba’s National Institute of Sports, Physical Education and Recreation, recently said that Cuba will only be represented by individuals living on the island. This would close the door on Arenado and a slew of other stars like Yoenis Cespedes, Yasiel Puig, and Jose Fernandez representing Cuba at the WBC.

Arenado says if Cuba were to change its mind, he’d be open to playing in a Cuban jersey during the WBC. “I think it would be an awesome thing, to wear the ‘rojo’ pants. But I always go back to my family,” he says. “I would have to ask my mom and dad if they would be OK with it. They were the ones who were directly affected by Cuba; it’s a very sensitive subject for a lot of Cubans.”

In the event Arenado does decide to play for his grandmother’s homeland, he could tip the scales in Puerto Rico’s favor. The Colorado slugger could theoretically be in the same lineup as Carlos Correa, Francisco Lindor, and George Springer, with Jake Arrieta and Marcus Stroman being possibilities to lead Puerto Rico’s pitching staff.

That certainly sounds like the makings of a roster that could win the WBC, especially after Puerto Rico was runner up to the Dominican Republic in 2013. Puerto Rico’s general manager Alex Cora would seem to agree, saying, “In Arenado we would have one of the most complete and athletic players in the majors today; he would be an asset to any team.” Which team Arenado decides to play for remains uncertain with the WBC less than a year away, but whichever team he chooses will be more than happy to welcome one of baseball’s rising stars.

Get our 2017 MLB & Fox Sports Betting Picks for the up coming season and any help that you need to beat the oddsmakers with Legend Jon Prices help.