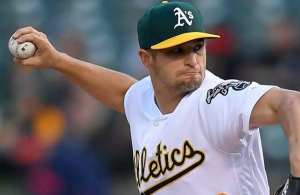 Graveman last pitched on Friday night against the Houston Astros, although he lasted just five innings and was pulled after 74 pitches for precautionary reasons. Oakland manager Bob Melvin explained after the game that Graveman was pulled because he couldn’t get loose on a cold night and that his early exit wouldn’t affect him moving forward.

“I felt good,” Graveman said after Friday’s game. “As the game went on, it was a little bit harder to stay loose. But it’s nothing that should raise any doubts or questions. I feel fine.”

However, something has apparently changed over the weekend, as Graveman is now heading to the DL with a shoulder strain.

“He didn’t feel great,” Melvin said about Graveman’s start on Friday. “I just wasn’t going to mess around with it. Makes no sense to have him keep pitching if we feel like something could potentially happen. He’s too important to what we’re doing. Just can’t mess around with it.”

With Oakland’s game on Sunday being rained out and the A’s having an off day next Monday, it’s possible that Graveman could return from the DL after 10 days only missing one start. Such a scenario would allow the A’s to play it safe with their young starter without having him miss much time. However, having to put him on the DL at all is disappointing for a team that has been riddled with injuries this season and has already made one performance-based change to its rotation.

Among the seven other players Graveman joins on the DL is Oakland ace Sonny Gray, who began the season on the DL after suffering a lat injury during spring training. Graveman and Gray being hurt at the same time deprives the A’s of their two best starting pitchers. Gray struggled in 2016, but was outstanding throughout 2014 and 2015, emerging as the team’s ace. He should be ready for a minor league rehab appearance soon, but may not rejoin Oakland’s rotation until next month.

Graveman, meanwhile, broke out as a bonafide no. 2 starter behind Gray during the second half of 2016. With Gray down to start the season, he took on the role of ace early in the season, going 2-0 with a 2.00 ERA over his first three starts. Going without both Gray and Graveman, even if it’s for a short period of time, is a huge blow to the A’s.

Outside of Graveman, Oakland’s rotation has been rather hit and miss this season. Andrew Triggs has been a pleasant surprise, as he’s won both his starts and is yet to yield a run this season. However, Sean Manaea has struggled in two of his three starts, while Raul Alcantara had to be relegated to the bullpen after just one start. He could be a candidate to replace Graveman in the rotation until he returns.

Heading into Monday, the A’s are nursing a three-game losing streak, and even if Graveman misses just one start, it should be considered an unfortunate setback for both him and the team. For the A’s to be successful this season, they need their starting pitching to carry them, and the longer they go without both Gray and Graveman in their rotation, the harder it’ll be to make some noise in what could be a wide-open AL West.