Fans spent all of the last season watching their team stink it up without Romo. So now they are supposed to believe a rookie fourth-round pick can lead the team to the promise land? 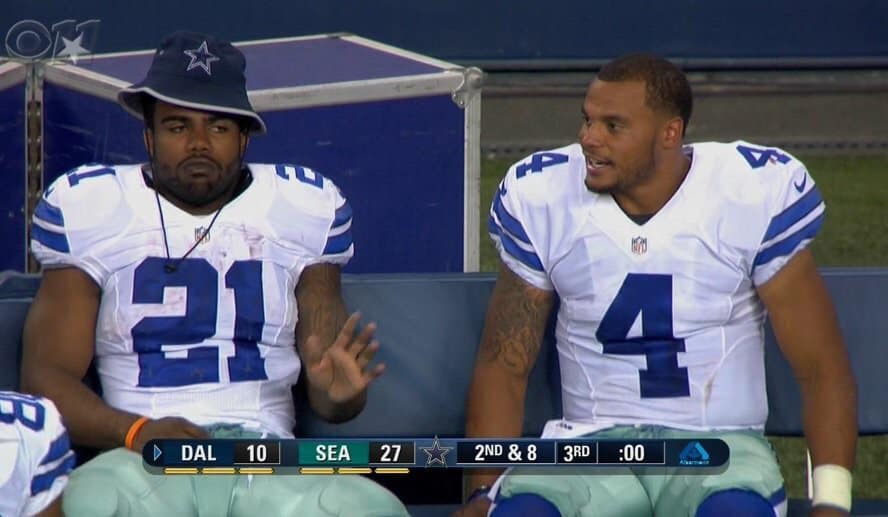 Does anyone want to buy the Brooklyn Bridge?

It seems like a far-fetched idea, but it’s possible for the Cowboys actually to be good without Tony Romo behind center. Actually—while who plays quarterback is important, it is not the most important position for the Cowboys this year. It isn’t rookie running back Ezekiel Elliot either.

That honor goes to the offensive line.

Many fans are counting on Dak Prescott to be the agent of change for the Dallas Cowboys this season, but the team will actually have five agents—the offensive line. Should they do their job as well as most believe they can, then it will not be too hard for Ezekiel Elliot and Dak Prescott to do their jobs well—and I one does well, it becomes easier for the other.

The Giants have already said they plan on making Prescott beat them with the passing game. It is probably safe to say they will throw all sorts of blitzes at him and stack the box to stop Elliot. Should the line pick up the blitz, Prescott will have an easier time connecting with his receivers. Should he do that well enough, the Giants will have to stop stacking the box—which will, in turn, make Elliot’s job a little easier.

If the Giants don’t stack the box, and the offensive line opens huge holes for Elliot, they will eventually do so forcing the secondary into single coverage. That will make Prescott’s life much easier—and it all started with the offensive line doing its job.

Both scenarios mean the offense is going to be on the field a lot longer and the defense a lot less. For a unit that is questionable at best, the less it has to do the better. Maybe if the defense is not on the field for most of the game (like it often was last season), they will play better.

And this can all become possible if the offensive line lives up to the hype.

If the line can do it not only against the Giants Sunday but every other week as well, there is a chance that Dak Prescott could make history. No rookie quarterback has ever won the division and started all 16 games. The Eagles and Giants are not expected to be serious competition this year.

Philadelphia’s quarterback is in for a rude awakening, and the Giants have no running game at all (the lack of balance in the offense will make them easier to beat). Washington could make a run for the division title again, but their running game is questionable right now, and it remains to be seen if Kirk Cousins can keep the good times rolling.

The bigger issue, of course, will be starting all 16 games. Jason Garrett and Jerry Jones have made it painfully clear that they will try to get Tony Romo back on the field as soon as possible. You would think they would have learned from last year when they rushed him back from his collarbone injury, but apparently not.  So chances are he will not start all 16 games this season barring Romo having some sort of setback.

If Romo does come back, the theory will still be true; more so actually because they will have to keep Romo from getting hit.

So one way or another, it all comes down to what the offensive line can do.