Posted on September 30, 2016 by Bryan Zarpentine 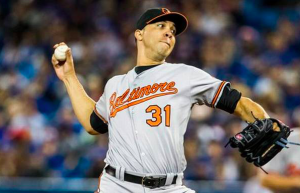 Nothing is for certain in the American League wild card race, as everything will be decided during the final weekend of the regular season, and possibly afterwards. The Baltimore Orioles beat the Toronto Blue Jays 4-0 on Thursday night, allowing the Orioles to take two of three games from Toronto and move into a tie with the Blue Jays for the top wild card spot in the American League, setting up for a wild and unpredictable final weekend of the season.

Surprisingly, it was Ubaldo Jimenez leading the way for Baltimore Thursday night. Despite owning an ERA well over 5, Jimenez tossed 6.1 shutout innings agains a powerful Toronto offense, securing a much-needed win for the Orioles, who had their postseason hopes temporarily dashed by a four-game sweep at the hands of the Boston Red Sox last week.

“It felt great,” Jimenez said about coming through in a big game. “There’s no words to put it (in perspective), but all of the guys, they know what we are playing for, and everyone is doing their parts, especially the last two game.”

A loss would have left the Orioles with a half game lead for the second wild card spot, but Thursday’s win gives them a little more breathing room as they head to New York to face the Yankees, who have won four games in a row despite now being officially eliminated from postseason contention.

In the opposite dugout, the Blue Jays are not discouraged after dropping the last two games to the Orioles, even with a trip to Boston to play the Red Sox lined up for this weekend. “The team mentality has never changed before,” said Marcus Stroman, who took the loss Thursday night. “We’re fine. We’re fine. We’ll take the same mentality and the same confidence into Boston, and hopefully we’ll go in there and get some wins. But it hasn’t changed from the beginning. It was the same exact confidence we had going into Texas down 2-0 last year (in the ALDS).”

The Blue Jays meeting the Orioles in a wild card playoff has long been a strong possibility, so it’s likely that these two teams could see each other again next Tuesday in the wild card game. However, that is not the only possibility in the American League with the Detroit Tigers and Seattle Mariners still alive in the wild card race.

The Mariners have the longest odds to reach the wild card, as they trail the Blue Jays and Orioles by two games with three to play. Seattle will likely have to win out and hope either Toronto or Baltimore lose at least two of three games this weekend to create a tie and potentially force a playoff before the actual wild card playoff. The Mariners finish the season with three games against the last place Oakland Athletics, giving them a realistic chance to win all three games left on their schedule, putting some pressure on the teams ahead of them.

Then there are the Tigers, who play three games against the Atlanta Braves this weekend. Detroit trails Baltimore and Toronto by one game in the loss column and may still need to make up a game Monday against the Cleveland Indians that was rained out Thursday if they end Sunday tied in the loss column for the second wild card spot. The Tigers need to win just one more game this weekend than either the Blue Jays or Orioles to force a makeup with Cleveland on Monday, which could then lead to an extra regular season game to get into the wild card playoff.

It’s all quite complicated, but the bottom line is that after Baltimore’s win over Toronto on Thursday, both teams still control their own destiny and can’t be caught if they keep winning. However, a loss or two by either team this weekend could open the door for the Tigers and Mariners to catch up, creating chaos in the American League. Of course, the Tigers and Mariners can ill afford to lose even one game this weekend, keeping Baltimore and Toronto in good position heading into the final weekend of the regular season.