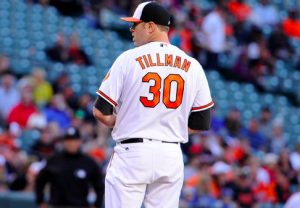 Despite having one of the worst starting rotations in the American League, the Baltimore Orioles have managed to stay in the thick of the playoff race in the AL East. However, they will now have to survive without their best starting pitcher, as the Orioles are poised to place righty Chris Tillman on the DL with a shoulder injury.

Tillman was given extra rest prior to his last start, which was Saturday against the Houston Astros, but he lasted just two-plus innings, allowing six runs and taking the loss. He threw a bullpen session on Tuesday but continued to complain of shoulder discomfort. Tillman was then examined by a doctor and received a cortisone shot. It’s now all but certain that he will land on the DL.

“I thought once it got loose it would really go away, but it never really did, and that was my first time actually experiencing it while throwing,” Tillman told reporters Tuesday night. “Last time, I was pretty sore right after my start, but after feeling it today, I’d much rather just get this behind us and get out in front of it so that way we’re not worried about it for the rest of the year.”

Tillman is 15-5 with a 3.76 ERA this season, bouncing back to lead Baltimore’s rotation after a subpar season in 2015. No other Orioles starter has come close to putting up those types of numbers this year, making Tillman the undisputed ace of the staff. “I don’t like it, but it is what it is,” Tillman said about having to go to the DL. “It happened, and we’ve got to get better now. I think this is the best way to go about it, and we had talked about it a little. I’d rather feel better at the end of the season, rather than fighting it all year.”

“We have three back dates and an off-day, so you’re talking about 11 days to try to resolve some of the things he’s feeling, hopefully,” said Baltimore manager Buck Showalter, showing optimism that Tillman will be able to return after the minimum of 15 days.

Ubaldo Jimenez, who was moved to the bullpen earlier this month, will make Tillman’s next scheduled start on Thursday. Jimenez has a 6.94 ERA this season. Kevin Gausman and Dylan Bundy are the only members of Baltimore’s rotation other than Tillman with an ERA under 4, and the Orioles will be relying on them to carry the rotation as long as Tillman is out. The Orioles are 20-6 in games started by Tillman this season, but one game under .500 when someone else is starting.

The Orioles currently find themselves two games behind both the Toronto Blue Jays and Boston Red Sox in the AL East. Baltimore does retain ownership of the second wild card spot, but the team obviously has its sights set on a division title to avoid a one-game playoff, which would most likely be against either Toronto or Boston. However, the task of winning the AL East just got a lot tougher with Tillman out. Even if he only misses a couple starts, those two starts could be the difference between a division title and a wild card spot, or no postseason spot at all.