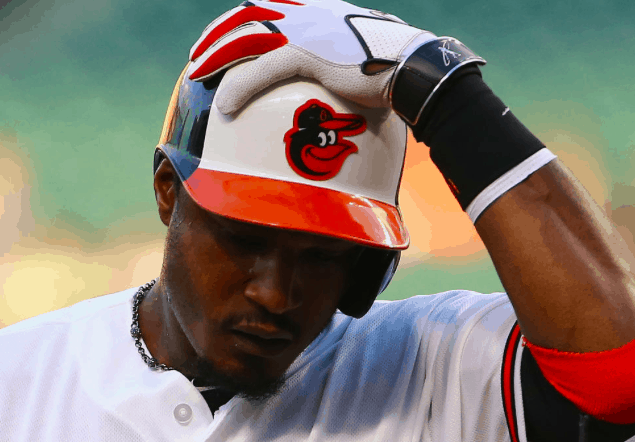 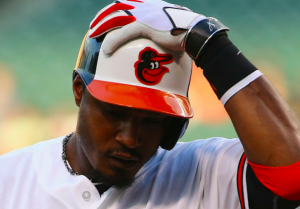 Baltimore Orioles center fielder Adam Jones has left two straight games prematurely due to issues with his hamstring. However, the team says it is not concerned about his health moving forward, even with the Orioles locked in a tight, three-way race for the AL East division crown.

Jones left Baltimore’s loss to the Washington Nationals on Thursday in the 9th inning due to what the team described as a cramp in his hamstring. He was put through pre-game tests on Friday before being given the go-ahead to play. However, Jones then left Friday’s loss to the New York Yankees in the 2nd inning with what the Orioles are calling a hamstring strain. Jones was pulled from the game after running out a ground ball to third base in his first at bat. He is officially listed as day-to-day.

Baltimore manager Buck Showalter said Jones appeared to be fine before Friday’s game. “He said he thought he’d be all right, went out to center field. I just didn’t like the way he was moving around. Decided not to take a chance with him,” Showalter said about taking Jones out of Friday’s game. “It’s not a DL thing. I think we’re still in pretty good shape.”

“Didn’t get to first base in as ample time as I wanted,” Jones said after Friday’s game. “Came out of the game, so something must have not felt great. Took me out of my element. [If] I ain’t got my legs as a center fielder, what more do you have?”

Jones also lamented putting Nathan Reimold, who replaced him in center field, “in a peculiar situation.” He says that he’s optimistic about returning soon, but doesn’t know for sure how long he’ll be out. “At this point and time in the season, missing more than a few games would hurt this team,” Jones said Friday night.

Jones is hitting .275 with 24 home runs this season, in addition to be a steady defensive presence in center field. Losing him for an extended period of time could prove disastrous for the Orioles, who enter Saturday two games behind the Toronto Blue Jays in the AL East, one game behind the Boston Red Sox for the top wild card spot, and one game ahead of the Detroit Tigers for the second wild card spot.

Even a mild injury to Jones is troubling because the Orioles don’t have a clear backup for him in center field, as Joey Rickard remains on the DL with a thumb injury. Baltimore has brought up Julio Bourbon, who has spent much of the season in double-A, to provide added depth in the outfield. Bourbon is starting in center field on Saturday with Jones out of the lineup.

The Orioles say they aren’t concerned about Jones, but if he were only going to miss a game or two, why bring up Bourbon? After early exits in two straight games, it could be several days until Jones is ready to return to the lineup. If the Orioles can get him back before Thursday when rosters expand, or at least survive without him until then, they can avoid putting Jones on the DL altogether. However, even a few days without Jones can have a significant impact on Baltimore’s playoff hopes, as there is little margin for error in the AL East right now.