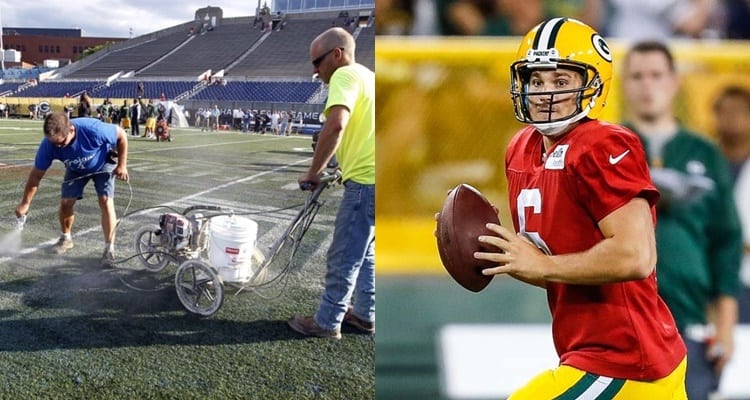 Sunday night was supposed to be the night for football fans. After going months with no football, the game was going to be back. It would be the preseason variety and would contain few of the stars for either the Indianapolis Colts or Green Bay Packers, but that would have been okay because football would be back.

It would have been too—had someone not used the wrong paint to mark the field for the game. Since they did, the field was deemed not safe for the players to play on, so the game was canceled.

Chances are that it would not have been much of a game. The Hall of Fame game rarely ever is. Teams are protective of their stars during a regular preseason slate, but when the slate has five games, even more so. So this game may have seen some stars for a series or two, but that would have been it.

The Hall of Fame game is typically played by the bubble players and the undrafted guys that will likely not be on the roster once the preseason ends. They are the guys that coaches liked, but were not sure if they could play at the NFL level (or any more for the bubble guys), so they get thrown into the mix first. If they do something incredible, they may see some more time in another preseason game.

If they don’t–no harm no foul. It’s only preseason.

So with Sunday night’s game being canceled, those guys lost a chance that they can’t get back. Most of them will still get an opportunity to play, but not nearly as much as they would have Sunday night. One guy lost something he will likely never get the chance to have again.

Joe Callahan, a former Division III standout from Wesley College, lost the opportunity to start in an actual NFL game (albeit a preseason one). He is not alone in that, of course, but his case is a little different than most. He would have become part of a tiny fraternity of Division III quarterbacks to start in an NFL game.

A number of Division III players have made it to the NFL and done well, but there have only been a handful of quarterbacks. Larry Wanke (John Carroll University) was the last to get drafted–he was Mr. Irrelevant in the 1991 draft–but didn’t make the final roster. There has been one quarterback that made the leap and went on to have a fantastic career– former Cincinnati Bengals quarterback Ken Anderson.

Anderson was drafted in the third round back in 1971 out of Augustana. He would play with the Bengals for his entire playing career, guided them to one Super Bowl (XVI; a loss to the San Francisco 49ers), and was named NFL MVP, Offensive Player of the Year, and Comeback Player of the Year in 1981.

Due to the level of competition, Division III players typically don’t even get a glance from NFL scouts, but on occasion a few do, and some of them have gone on to have excellent careers–just not at quarterback. A handful have made it onto practice squads, but typically see the field only during the fourth quarter of preseason games.

Getting a chance to start could have been huge for Callahan. In every other preseason game, he will likely be stuck playing late in the game with a bunch of guys that will not make the roster. It’s kind of hard to play well enough to earn a roster spot under those conditions. If Brett Hundley is healthy next week, Callahan will be relegated back to being a reserve.

The Hall of Fame game could have been his chance to impress–but he lost it because someone used the wrong paint.

There will be a lot of talk about how embarrassing canceling the game is; how it cost the Hall of Fame $4 million. Many will wonder why there wasn’t a contingency plan since the stadium has been undergoing renovations. The high school team that uses it has prepared to play elsewhere all season. The media will talk about why there wasn’t a contingency plan in place, what it could have been, and what it should be in the future.

Fans will be angry, but no one will be talking about the real crime—the opportunity that was stolen from Joe Callahan.