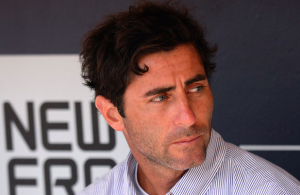 Major League Baseball has suspended San Diego Padres GM A.J. Preller 30 days following an investigation into the team’s handling of medical information. Specifically, the investigation looked into the exchange of medical information between the Padres and the Boston Red Sox during a July trade that sent starting pitcher Drew Pomeranz to the Red Sox for pitching prospect Anderson Espinosa.

Investigators spoke to officials from both the Padres and Red Sox and found that Preller and the Padres did not share required information with the Red Sox prior to completing the trade. After reading the report, MLB Commissioner Rob Manfred handed down the 30-day suspension to Preller. After Preller serves his 30-day suspension without pay, MLB will consider the matter closed.

The suspension came several hours after ESPN’s Buster Olney published a report stating that the Padres told team trainers during spring training that they were to keep two separate medical files for players. One medical file would be for team use only, while the other would be shared with other organizations. Trainers were told doing so would put the Padres in better position with regard to trades.

It’s important to note that the suspension pertains only to San Diego’s trade with Boston involving Pomeranz. In addition to the Red Sox, the Miami Marlins and Chicago White Sox both voiced complaints about the way the Padres handled medical information during trades this summer.

The Padres and Marlins made a seven-player trade that included pitcher Colin Rea being traded to Miami. However, Rea left his first start with the Marlins with an elbow injury that may require Tommy John surgery, although at the moment Rea has opted for an alternative treatment. The Padres then made a separate trade with the Marlins to re-aquire Rea, sending back one of the prospects Miami gave San Diego in the original trade. At the time, it appeared to be a gesture of goodwill on behalf of San Diego, but in retrospect it could be interpreted as the act of a guilty organization trying to cover up its misdeed.

With the suspension handed to Preller pertaining only to the trade involving Pomeranz, it’s possible for the Marlins to ask MLB to investigate their trade with San Diego. Several other teams could do the same, as the Padres had quite the fire sale this summer, making several notable trades.

Generally, teams insert all medical information about players into a central data base, monitoring every trip to the trainer’s room, every medication prescribed, and every scan taken. Team trainers will then share this information with other clubs when trades are close to being finalized. According to Olney’s report, the Padres were inserting information into two different databases, one that was shared with the rest of the league and one that wasn’t.

San Diego trainers were told not to insert information about preventative measures taken; meaning no information was added to the database made available to the league unless an injury caused a player to be placed on the DL. With regard to the Pomeranz trade, the Red Sox did not know about any of the preventative treatments Pomeranz received while with the Padres. Boston made no effort to nullify the deal or seek additional compensation.

One has to wonder if the Padres will welcome Preller back as their GM following his suspension. Olney’s report suggests that the teams that conducted trades with the Padres this summer are quite angry. Those relationships could be difficult to re-build if Preller remains the GM in San Diego. The publicity generated by the investigation and suspension are enough to make any team hesitant to do business with Preller. In addition to San Diego’s continued on-field struggles, this incident could potentially be enough to cost Preller his job with the Padres and his future as a GM in the majors.