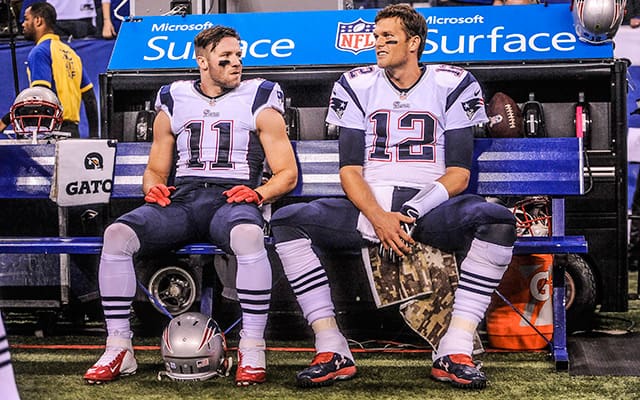 It is ridiculous that the whole “Deflate Gate” mess could keep Tom Brady out for a few games this year, but there does appear to be a good chance that he may end up being suspended when the 2016 season kicks off in September. Should that be the case, the Patriots are going to want to give Jimmy Garoppolo all the help they can.

But it looks like Garoppolo may be forced to play without one of the Patriots best offensive weapons—wide receiver Julian Edelman. In fact, there is a good chance Tom Brady will have to go much of the season without the services of Edelman as well.

Why? You can blame all the speculation on Dallas Cowboys wide receiver Dez Bryant.

Back during the 2015 season Bryant an Edelman ended up breaking the fifth metatarsal bone, Bryant in his right foot and Edelman in his left. Bryant’s occurred early in the year, he had surgery, and returned later in the season but was clearly not the same player.

Bryant ended up having a second surgery in January to better stabilize his foot. He wasn’t cleared till last Wednesday to start participating in football drills. That puts his recovery timeline at about five months—but that is just to start practicing more. He has yet to be completely cleared for action.

Edelman suffered his injury during Week 10 and didn’t return until the postseason. At first, the team didn’t think he would need a second surgery, but he ended up having it in April. Working from Bryant’s timeline, he may not begin participating in drills till after the season starts in early September.

Tack on time to get in playing shape and Edelman may very well be out until sometime in November.

That would not be good for Garappolo or the Patriots.

Careers have ended for some guys after they suffered this injury. As much as they could use him back sooner rather than later, they will not want to risk bringing him back too early and causing further damage.

So when the season starts, the New England Patriots may have to get along without the services of Tom Brady and Julian Edelman. Brady’s case is ongoing, but it doesn’t look good for him. The Patriots say they are optimistic Edelman could be ready for training camp which would mean he will be ready to go in Week One.

What do we expect the team to say? Of course, the party line is going to be that he will be ready. Does that mean he will be? Absolutely not, but it doesn’t mean he will not be ready either.

Fans will just have to wait and see.