"Mr. Price has been given the "Billy Walters treatment" by the betting establishments in the Las Vegas area, due to his distinct ability to pick winners and cost casinos millions."
Home
Football
Philadelphia Eagles Plan On Making Carson Wentz Inactive On Sundays

When an NFL team drafts a quarterback, one of two strategies is usually employed. Either he is thrust into the starting lineup from Day One like Andrew Luck was with the Indianapolis Colts or he sits on the bench and watches for a year or two like Green Bay Packers quarterback Aaron Rodgers. Productive quarterbacks have resulted from both strategies. They have produced duds as well. 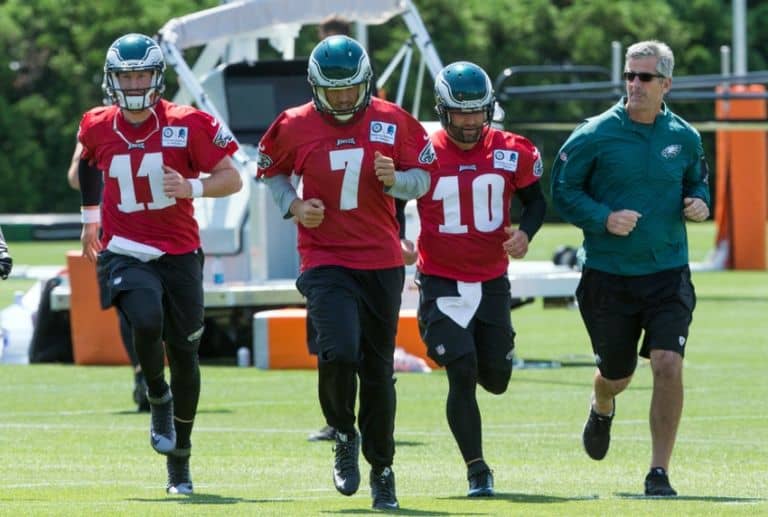 It appears that the Philadelphia Eagles are going to be using the ‘sit and wait method’ with the No. 2 pick in the draft, Carson Wentz. The team has announced that they intend on making him inactive on Sundays.

If he isn’t even in uniform, then they can’t be tempted to play him.

Why trade up for a quarterback you are going to end up guaranteeing over $26 million to over the next four years when you are paying other guys as much as the Eagles are?

No one but the Eagles front office will ever truly know the answer to that question.

Since the team has two guys they can suit up on Sundays in Bradford and Daniel they will not need to suit Wentz up, but fans like to see their first round pick in uniform sooner rather than later. Owners like to see what they are paying for too.

However, while Wentz looked great in college, he did play at a lower level of competition in the FCS. Making the jump from there to the NFL as a rookie could be too much. Sitting and practicing for a year or two will give him the chance to acclimate to the speed of the NFL game during the preseason and in practice.

The problem that plan could run into, though, is Sam Bradford. What if the often injured quarterback goes down with another injury? What if he struggles in the new system and looks like crap (like he did last year)?

Can they expect to be able to hold Wentz out for the entire season?

Bradford has to know he is not going to be in Philadelphia for the next two years. Unless Wentz gets hurt this season, Bradford is going to end up being a salary cap casualty during the offseason.

So if he wants to be in camp with someone in 2017 he needs to play like a former No. 1 pick should play. He needs to if he wants to have a job next year. As long as he does play well, the Eagles will not have to rush Wentz onto the field before he is ready.