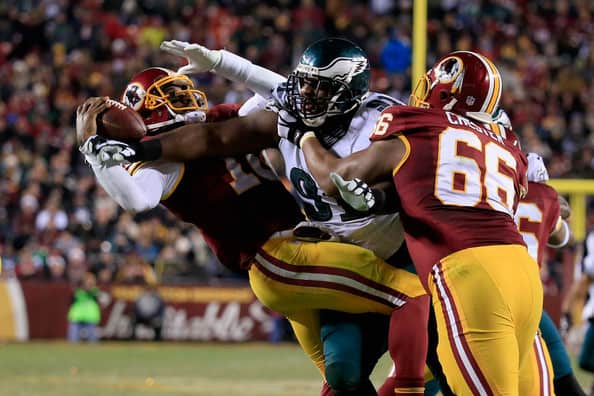 John Elway was an excellent quarterback back in the day. He has done a pretty good job as an executive so far as well—but thanks to the Philadelphia Eagles, his job just became a whole lot tougher.

The Eagles have signed defensive lineman Fletcher Cox to a six-year, $103 million. Big deal, right? He’s a down lineman, and Miller is a linebacker. Denver has already offered Miller more than that (six-years, $114 million) which he turned down.

So what’s the big deal as far as Denver is concerned? It’s the guaranteed amount. Denver has only been willing to guarantee Miller $38.5 million while the Eagles have given Cox the highest guarantee for someone other than a quarterback in NFL history–$63 million.

If anyone bothers to ask Elway how Cox’s deal will affect negotiations with Miller, Elway will probably respond with some comment on how they are different players playing different positions and shouldn’t be compared.

But the world will, of course, do just that. Both players are among the best at disrupting passing games. Miller was vital to the Broncos beating the New England Patriot in last season’s AFC Championship. His game in the Super Bowl was one for the ages and earned him the MVP.

Cox—well, he has been a great player on a mediocre team.

Rumor has it that the hold up for Miller has been the guarantee. With Olivier Vernon getting $52.5 million guaranteed in his new contract with the Giants, most expected Miller to get more. Instead, it appears that Elway chose to ignore how the Giants overpaid Vernon and be more fiscally responsible.

As Denver’s last offer to Miller stands, the guarantee covers his next two seasons but leaves him open to becoming a salary cap casualty in the third year. Should the Broncos decide they don’t think he’s worth it or, he gets injured in the next couple of years they can cut him loose.

Miller does not have an extensive injury history, but due to the nature of his position, his body is going to take a lot of punishment every season. So it is not outside the realm of possibility that he could become injured. At the same time, he may very well be injury-free for the rest of his career.

Cox’s contract will probably add a little fuel to the fire for those who think Miller should holdout even if it means missing games. While that would put pressure on the Broncos, with no quarterback next season, the team is going to have to count on its defense even more than it did last season.

Miller was certainly not the only playmaker in the unit, but he was one of the best. Offensive coordinators would love not to have to game plan for him next year should he holdout.

It is hard to see him doing so, though. Miller is a competitor. He is not going to want to let down his teammates. Another fantastic year would certainly put even more pressure on Elway to give in and pay Miller what he deserves.

Then again, Miller would be a year older with another season of wear and tear on his body…