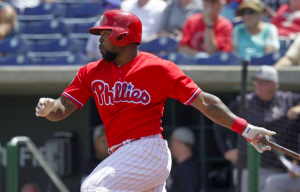 It’s already been a rough year for the Philadelphia Phillies, and it may be about to get worse. On Tuesday, the club placed veteran Howie Kendrick on the 10-day DL with a strained right abdomen. Kendrick, aside from being a veteran presence on an otherwise young team, has been one of the few bright spots for the Phillies early in the season, and losing him for any amount of time is a significant setback for a team in danger of falling far behind in the NL East early in the season.

Kendrick suffered the injury on Saturday while throwing the ball from the outfield. He was able to stay in the game, but Kendrick did not play on Sunday and even after an off day on Monday, he was not ready to play in Philadelphia’s series opener against the Mets on Tuesday, prompting the Phillies to put him on the DL.

The Phillies don’t believe that the abdominal strain is serious, but there’s no set timetable for Kendrick’s return. Now 33 years old, there’s no guarantee Kendrick will be quick to recover from any injury, and so the Phillies would rather take the safe approach with the veteran.

“It’s not his oblique,” Phillies manager Pete Mackanin said before the team made Kendrick’s trip to the DL official. “It’s something in his chest, when he threw. He told me if he were young and eager, he probably would tell everybody he could play. But he’s a little smarter now and he’s being cautious. I told him we’re going to be cautious with it.”

The Phillies acquired Kendrick from the Dodgers over the winter to add a veteran presence and some depth to their lineup, and through the first two weeks, he’s done just that. Despite not hitting a home run over his first 10 games of the season, Kendrick is hitting .333 with an OPS of .833. Other than second baseman Cesar Hernandez, Kendrick has been the team’s most productive hitter, and so his absence leaves a sizable hole in Philadelphia’s lineup.

While Kendrick is out of the lineup, switch-hitting journeyman Daniel Nava figures to split time in left field with Aaron Altherr. Nava has gotten off to a fast start this year in limited at-bats, although the Phillies may be more inclined to give Altherr an opportunity until Kendrick returns. Altherr showed some promise late in 2015 but struggled to carve out a role last season after missing the first half of the season with a wrist injury.

Instead of bringing up a position player to replace Kendrick on the roster, the Phillies decided to call up Mark Leiter Jr. to help reinforce one of the worst pitching staffs in the National League. Leiter has yet to pitch in the big leagues, but he’s off to a good start in triple-A as he continues to transition from starter to reliever. For the time being, the Phillies will go with a short bench, although they could bring up either Roman Quinn or Nick Williams at some point, especially if Kendrick doesn’t return after the minimum of 10 days on the DL.

Even if Kendrick is able to return in short order, the Phillies desperately need other players to step up in his absence. Most of Philadelphia’s lineup has struggled early in the season, and those struggles could become more apparent with Kendrick unavailable. If the Phillies can’t find other sources of offense aside from Kendrick and Hernandez, they risk being buried at the bottom of the NL East by the end of April.