Phillies Shut Down Vince Velasquez for Rest of Season

Posted on September 4, 2016 by Bryan Zarpentine 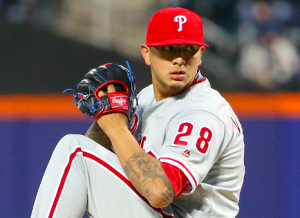 Far from contention, the Philadelphia Phillies have decided to shutdown starting pitcher Vince Velasquez for the remainder of the season to prevent his innings count on the season from climbing too high. The move came immediately after Velasquez threw seven innings in a start against the Atlanta Braves Saturday night.

After Saturday’s start, Velazquez has thrown 131 innings this season, plus five innings in a minor league game earlier this season. His previous career high for innings was 124.2 innings in 2013, although he threw just 88.2 innings last season, and so both the team and his agent have been monitoring his workload carefully this season.

In his 24 starts this season, Velazquez is 8-6 with a 4.12 ERA, including one complete game shutout. He has struck out 152 batters in his 131 innings. Valezquez, who was acquired last winter from the Houston Astros in the trade that sent Ken Giles to the Astros, is one of several young pitchers the Phillies are hoping can help them turn things around in the years to come. Thus, Philadelphia does not want to risk overtaxing Valezquez with too many innings, potentially putting him at risk for injury or hindering his performance next season. The 24-year old Valezquez figures to pitch alongside the likes of Aaron Nola and Jerad Eickhoff in Philadelphia’s rotation for many years to come.

Valezquez is disappointed he won’t be pitching for the remainder of the season, but says he learned a lot this year amidst several highs and lows. “I dealt with a lot of adversity and failure and managed to somehow pick myself back up and finish strong,” he said. “I think I’ve matured pretty well.”

He also says that he plans to continue to learn and grow while simply watching the final month of the season from the dugout. “Just sit down, watch the game and learn as I go,” Velasquez said, explaining his plans for the rest of 2016. “It’s not the end of the road now. It’s all about learning the game and knowing how to get better for next year. This game is fun to learn. That’s pretty much all I’m going to do.”

Philadelphia’s new catcher A.J. Ellis has encouraged Valezquez to spend the final month of the season watching Arizona Diamondbacks ace Zack Greinke as much as possible. Ellis, who caught Greinke the last three years while both were with the Los Angeles Dodgers, believes there are some similarities between Valezquez and Greinke.

“With the Dodgers it was just phenomenal how he utilized his changeup that much and protected his fastball,” Velasquez said. “I’m kind of like the same way. I think that’s pretty much the objective. Just go back to last year’s film and watch what he does and pretty much apply it to myself for next year.”