"Mr. Price has been given the "Billy Walters treatment" by the betting establishments in the Las Vegas area, due to his distinct ability to pick winners and cost casinos millions."
Home
Baseball
Pirates' Ryan Vogelsong Goes To DL After Getting Hit in Face

Pirates’ Ryan Vogelsong Goes To DL After Getting Hit in Face 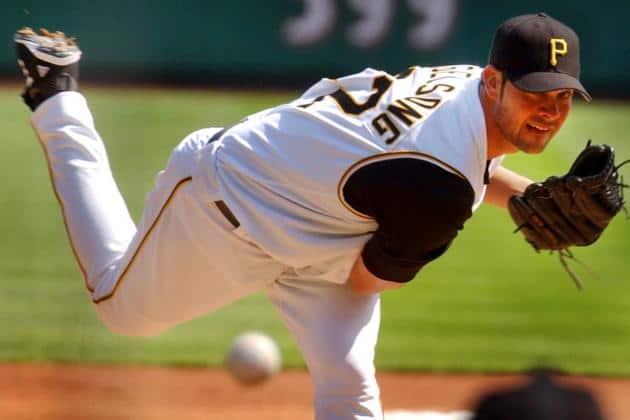 Pirates’ Ryan Vogelsong to DL after being hit in the face.

One day after Ryan Vogelsong was struck in the face with a pitch, the Pittsburgh Pirates put him on the 15-day DL with facial fractures. In addition to multiple facial fractures, there is reportedly swelling around the eye, but it’s believed that Vogelsong escaped significant damage to the eye.

Vogelsong started Monday’s rain makeup game against the Colorado Rockies. He was batting in the second inning when a pitch from Colorado rookie Jordan Lyles struck Vogelsong in the face. He went straight to the ground, but remained conscious while being tended to by Pittsburgh trainer Todd Tomcyzk. After a few minutes, Vogelson was carted off the field and taken to a hospital.

After the game, Tomcyzk described the injury as being to the “eye itself,” including the orbital bone. The injury is limited to Vogelsong’s left eye, despite initial speculation that both eyes were affected. Monday night, Vogelson’s wife, Nicole, said on Twitter that he husband was “stable & will be ok.” She also wrote, “I just wanted to say THANK YOU for the outpouring of love & prayers for Ryan.”

The Pirates have not offered any additional update on Vogelsong aside from placing him on the DL, which is not a surprise to anyone who has seen video of Lyles’ pitch hitting Vogelsong. It’s not known if he’s been released from the hospital or if his vision has been impacted. Needless to say, he won’t be returning to the field anytime soon, and his overall health is a far larger priority than his career.

Vogelsong has been an important part of the Pittsburgh pitching staff this season, filling the all-important swing man role, pitching primarily out of the bullpen while also making an occasional spot start, which was the case on Monday. To replace Vogelsong on the roster, the Pirates have called up pitcher A.J. Schugel from triple-A.