Pittsburgh Pirates Have No Intention of Rushing Top Pitching Prospects 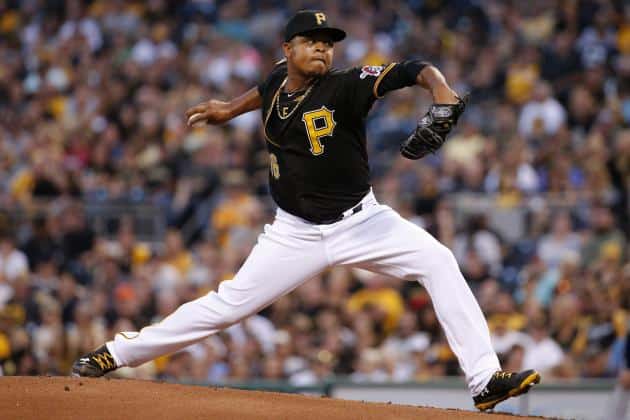 Pirates will slowly ease back in injured pitchers, despite team falling behind in the early part of the season.

Roughly one-quarter through the MLB season, the Pittsburgh Pirates are already six games behind the Chicago Cubs in the NL Central and on the outside looking in for a wild card spot. They are far from out of contention for a playoff spot, but with the Pittsburgh pitching staff ranked 10th in the National League in ERA, the Pirates don’t exactly look like a team that’s ready to close the gap in the division. At least not without any reinforcements, and those don’t appear to be coming any time soon according to GM Neal Huntington.

The Pirates have two of the best pitching prospects in baseball in Jameson Taillon and Tyler Glasnow. Both are in triple-A and appear all but ready to come to the majors, but Huntington says there are no plans to promote either one for the foreseeable future. Huntington admitted to reporters on Sunday that both will likely be in the big leagues before the end of the season, but says, “In a perfect world, they have a full year in Triple-A.”

No one’s arguing with Huntington’s logic, but the situation says that both pitchers are ready and that the Pirates need them. In nine starts in triple-A this season, Glasnow has a 2.16 ERA with 63 strikeouts in 50 innings. That was after he posted a 2.20 ERA in eight starts at triple-A last season, giving him close to 100 innings of experience at that level, all with results that indicate he’s not being challenged by triple-A hitters.

Taillon’s situation is a bit more complicated, as he missed all of 2014 and 2015 due to Tommy John surgery and a hernia injury he suffered during his rehab. However, Taillon has a 1.82 ERA in eight starts at triple-A this year, in addition to six starts he had at that level in 2013 before needing Tommy John. It would make sense to be a little more conservative with him, but he’s not far behind Glasnow in terms of preparedness for the majors and the potential to help Pittsburgh’s rotation right now.

Meanwhile, outside of Gerrit Cole, the Pirates are not getting what they were expecting out of their starting rotation, which has held the team back this season. Francisco Liriano has the highest ERA he’s had since coming to Pittsburgh; Juan Nicasio has followed up a strong April with a sub-par performance in May; Jon Niese is arguably having the worst season of his career; and Jeff Locke’s ERA is an even 5.00.

It’s hard to imagine two pitchers as talented as Glasnow and Taillon performing any worse than Pittsburgh’s contingent of starters outside of Cole have performed this year, especially considering how dominant the young duo has been in triple-A this year. Promoting at least one of them right now could push one of Pittsburgh’s current starters to the bullpen, another unit that could use a boost.

There’s little that’s wrong with Huntington’s conservative approach to young pitchers, but he may be overdoing it. It’s getting harder and harder to argue that Glasnow and Taillon aren’t major league ready and capable of instantly upgrading Pittsburgh’s rotation. Each gem they pitch in triple-A is a wasted outing because they could be doing that for the Pirates. Pittsburgh’s pitching staff needs help, and that help is ready and waiting at triple-A. Until the Pirates receive that help, it’s difficult to envision them making up much ground in the NL Central.