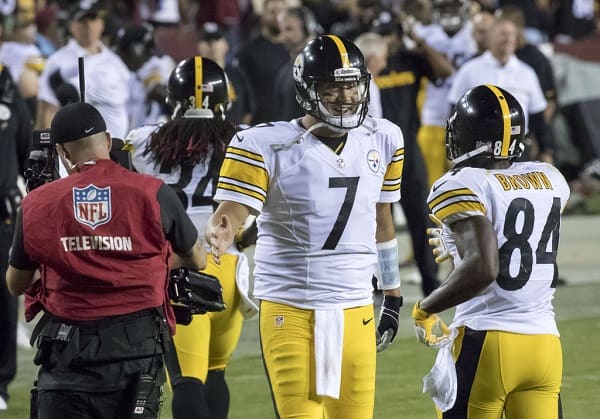 The 2016 NFL season’s first two weeks are in the books, which means it’s time to look at Week 3’s picks against the spread. Sunday afternoon, we have a battle for Pennsylvania between the Pittsburgh Steelers and Philadelphia Eagles. Who has the best odds in this one?

The Steelers may be on the road, but they enter this game the 3.5-point favorites. In fact, they opened the week as 5.5-point line; however, that’s gone down a couple since the birth of “Wentzlemania.”

Yes, Carson Wentz has jumped into the NFL scene and played at a high level. So, too, has the nicknames and puns.

The hype is warranted, though. After having the Eagles trade up to the No. 2 pick of the draft to take him — making him the highest drafted FCS quarterback of all time — they then traded away Sam Bradford and bumped him up from third to first-string. In his first two games, Wentz is 2-0 and has completed 60.6 percent of his passes for 468 yards, three touchdowns, no interceptions and a 94.1 passer rating. All this while getting absolutely pummeled multiple times by oncoming pass rushers.

Seriously, the man needs to learn to slide or get out of the way or his career isn’t going to last very long.

Anyhow, Wentz has been great, and this Eagles defense has surprisingly been better than expected.

How will they contend against a dynamic Steelers team, though? Pittsburgh is 2-0 as well, and has the firepower that they didn’t have to face against the Cleveland Browns and Chicago Bears. Ben Roethlisberger, Antonio Brown and DeAngelo Williams create a dynamic trio that not many teams can neutralize. Can this Eagles defense slow them down enough?

The Steelers absolutely dismantled the Eagles’ division rivals, the Washington Redskins, in Week 1, and then followed that up with an extremely impressive victory in Week 2 against the Cincinnati Bengals. The Eagles may have started this year off well, but you can’t say they’re anywhere near the talent level of the Bengals at this point.

Odds are, this is going to be a bit of a wake-up call for Wentz and Philly. The rookie has looked good, but the running attack has been weak; all the while, they’ve relied on the defense (who was playing two struggling offenses) to provide them solid opportunities to score touchdowns.

That’s not going to cut it against the Steelers high-powered offense.

Bets to Make: lay the points with the Steelers. They only have to outscore the Eagles by four, and that shouldn’t be much of a problem — even on the road. Take the over as well.