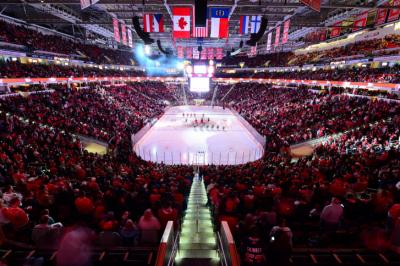 An indoor sports and entertainment venue located in downtown Raleigh, North Carolina, the PNC Arena is primarily the home for the National Hockey League’s Carolina Hurricanes.

Before being named PNC Arena, the venue was also named the Raleigh Entertainment & Sports Arena, and also the RBC Center, before reaching its current name.

In addition to being the home of the NHL’s Carolina Hurricanes, the facility also serves as home to the North Carolina State Men’s Division I College Basketball Team.

The stadium originally stemmed from the local college, North Carolina State’s attempt to acquire a new home-arena in the 1980s to replace their old and aging home-arena, Reynolds Coliseum. The project didn’t start for over a decade later after the start of their search for a new stadium.

• Construction of the stadium took over two years to complete with the ground breaking event being held on July 22, 1997 and the official opening of the stadium held on October 29, 1999.

• A number of renovations have been made to the arena including a ribbon board that was installed in 2003 which goes around the entire rim of the playing area.

• In October of 2015 architects met to discuss the possibility of more intensive renovations like new entrances and rooftop restaurants.