Preview: No. 11 Wisconsin Badgers At No. 8 Michigan State Spartans—Two Good Teams Enter. Only One Will Leave.

As great as college football is, it has one inherent flaw. It is so freaking hard to tell who is actually good and who is benefitting from a weak schedule.

When a major college like Michigan State starts the season with a less than impressive 28-13 win over an FCS team, there is good reason to think they may stink. Then they beat Notre Dame the following week by a score of 36-28. So does that mean they are good? But how do you factor in the 36-7 lead almost disappearing?

Then there’s a team like Wisconsin. The Badgers surprised the football loving free world with a 16-14 in over LSU to open the season, but the Tigers are not nearly as good as their No. 5 ranking at the time would indicate. Following that game up with a big win over Akron doesn’t tell us much because they did what they should do against a smaller team. 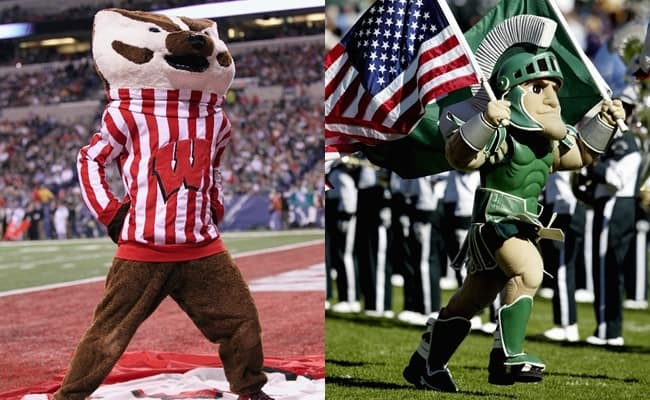 But then they struggle against Georgia State. They win—but it wasn’t a very convincing one (23-17).

Wisconsin does have its issues. Star running back Corey Clement could miss another week, and the team has had trouble getting consistent play from its quarterback. Bart Houston got the start in the season opener against LSU. He did an adequate job but didn’t do much to help the team win.

Alex Hornibrook replaced him late in the third quarter against Georgia State and kept the team from being embarrassed with a loss. He’ll get his first start Saturday against the Spartans.

“I thought that when we were in fall camp, I told both quarterbacks that we’ve got to get them both ready to play and that they both would play,” Badgers head coach Paul Chryst told the Big Ten Network. “Sure enough, both have played. I thought Alex did some really good things and helped us. I thought he earned the opportunity to get more snaps and to get the start.”

For the Badgers to have a chance, they are going to have to give their freshman quarterback plenty of time to pick apart the Spartans secondary. It’s how DeShone Kizer got Notre Dame into the game after falling behind by 29 points.

It would help if the team could get a running game going, but the Badgers will be without Bradrick Shaw, and it’s not looking good for Corey Clement.

“He’s done more this week than last week, so I think there’s a chance,” said head coach Paul Chryst on Thursday when asked about Clement’s status.

Without a running game, the Spartans defense will likely blitz Hornibrook early and often in order to keep the freshman from getting on target with his receivers.

When the Spartans are on offense, they will try to shove LJ Scott as far down the throat of the Badgers defense as they can. If Wisconsin’s defense can slow down Leonard Fournette, they should be able to handle LJ Scott too.

However, Tyler O’Connor is a capable passer, and the Spartans have a few decent receivers for him to throw to.

Wisconsin is a good team, but the Badgers have too many question marks to compete with a more complete team like the Spartans. They should be able to keep it interesting, but they are going to be hard-pressed to pull out the win.