Preview: No. 17 Arkansas Razorbacks At No. 10 Texas A&M Aggies—Could This Be The Year For The Aggies?

Arkansas is tired of being on the bottom of the SEC and would love to make some noise this season. Texas A&M would love to prove that they can be a legitimate contender in the SEC. For either to do what they want they have to at least win the games, they feel they should win. Both probably feel like they should be able to beat the other.

While the Aggies were the beneficiary of a little luck the last couple of seasons, Brett Bielema may need a little luck to win this time. His team barely managed to beat Louisiana Tech when they should have destroyed the Bulldogs. They showed a lot of promise against TCU and came back to win the game in overtime, but they also let a 13-0 halftime advantage slip away. 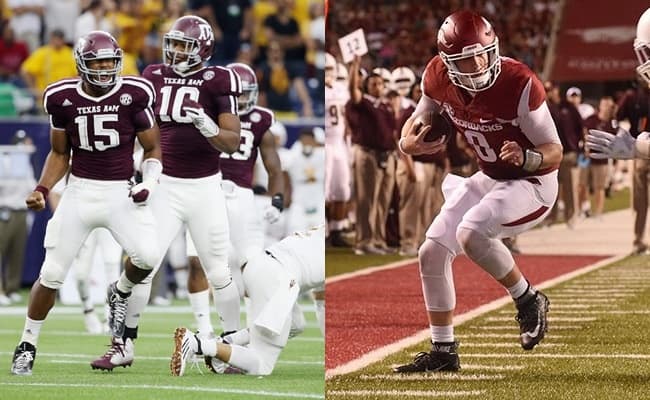 Everything went right for the Razorbacks against Texas State, but everything should have gone right against the Bobcats.

Texas A&M will be the best team the Razorbacks have seen to date—and they are nothing like the A&M teams Arkansas has grown accustomed to playing. This Aggies team does not count on outscoring opponents and passing for 400 yards a game because its defense can’t stop anyone.

This Texas A&M team is still one of the best offenses in the nation (No. 14), but it is no longer dependent on the passing game. The Aggies have become a pretty good running team as well (No. 24 with 237.0 yards a game).

Arkansas has a good defense, but not an exceptional one. It will be hard-pressed to account for all of Texas A&M’s playmakers, but if they can slow Trevor Knight and the Aggies down that may be enough—that is, if their offense can get moving.

Unlike in years past, it will not be as easy to run on the Aggies defense this time around. Auburn was able to gash the Aggies for 236 yards, but they were not able to pass very well (22/35, 163 yards) and had less success as the game went on.

Arkansas will need to get running back Rawleigh Williams III going to help take pressure off of their quarterback, first-year starter Austin Allen. After watching his brother lead the team the last couple of years, Allen is getting his chance this season. While he has done well (67.1 completion percentage, about 219 yards/game, and just two interceptions), he has yet to face a pass rush like the one Daeshon Hall and Myles Garrett provide the Aggies.

The Razorbacks defense will need to get in Trevor Knight’s face early and often and do whatever it takes to keep Trayveon Williams and Keith Ford from breaking the running game open. Both have big play potential every time they get their hands on the ball; Williams certainly proved that last week with his 89-yard touchdown run.

If they let Knight get comfortable throwing the ball, he will have fun tossing it up for Josh Reynolds, Ricky Seals-Jones, and Christian Kirk to go get, and the score will get out of hand–fast.