Preview: No. 17 Tennessee vs. Virginia Tech—Volunteers Hoping For Redemption In Battle At Bristol 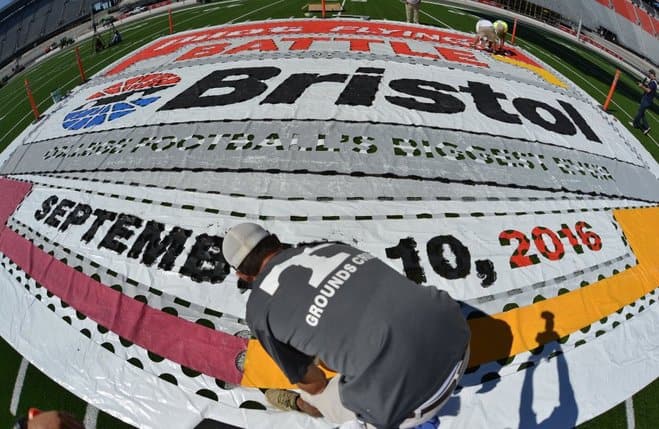 Bigger is better. Big is beautiful. The more, the merrier. Large and in charge. Supersize it. When it comes to the size of just about anything, we are conditioned to believe that size matters. This weekend’s contest between the No. 17 Tennessee Volunteers and the Virginia Tech Hokies—the Battle at Bristol—will forever be remembered because of the size of one thing.

The game is not going to take place at a football stadium, but inside the track at the Bristol Motor Speedway in front of 150,000 to 163,000 people—the largest crowd to ever watch a college football game.

The novelty will attract some fans, but will it be a game worthy of the largest crowd in college football history?

The best and most honest answer to that is a definite—maybe. Both are coming off successful seasons that ended with bowl wins. It was the first time Tennessee ended the season ranked in the top 25 (No. 22 AP) since 2007 (No. 12 AP). The Hokies were able to send longtime head coach Frank Beamer into retirement on a winning note.

This season marks the beginning of a new era for both teams, Virginia Tech with a new head coach for the first time in 30 years and Tennessee as a team with actual expectations. The Hokies got things off on the right foot with a win over an easy opponent. While Tennessee did get the win, the Volunteers struggled mightily against what was supposed to be an easy opponent.

So in front of 150,000 people, the Hokies will make a statement with a win over a ranked opponent or the Volunteers will prove the expectations they came into the season facing are still within reach.

Only one can make the statement they want. Who will it be?

Virginia Tech’s best chance will be to start fast, strike first, and strike often. Tennessee’s players will probably come into the game looking to prove last week was a fluke, but if they were to get behind early the “here we go again” mentality may set in. If it does, the Hokies will have a much better chance at keeping the lead after the early surge of emotions dies down.

Under their new head coach, Justin Fuente, the Hokies are trying to go with a more up-tempo offense. Jerod Evans is a good dual-threat at quarterback. However, the strength of the Tennessee defense is in the secondary so the Hokies will need to get the run game going—which will be easier said than done.

The interior of the offensive line struggled against Liberty last weekend, the blocking on the edges needs to be better, and the skill players are not the best blockers either. Anytime your quarterback is the leading rusher with only 46 yards (37 which came on one run)–well, that’s not good.

But if the defense can keep Joshua Dobbs and the Volunteer offense from getting on track, Virginia Tech’s offense may get the time it needs to get on track.

Bud Foster, Virginia Tech’s longtime defensive coordinator, will get the most he can out of his guys, and he’ll need it all against Tennessee’s talented offense. Joshua Dobbs can be erratic at times, and if the Hokies can keep him from getting on track, the odds will shift towards Virginia Tech.

For that to happen, the Hokies will have to shut down a pair of very good running backs in Jalen Hurd and Alvin Kamara. Tennessee will try to lean on them to take pressure off of Dobbs.

If it works–Tennessee wins. If it doesn’t—Tennessee still might because the Virginia Tech offense may not be able to handle the Volunteers defense. The Hokies’ offense is athletic and will give the Tennessee defense a good challenge, but in the end, the more talented team—Tennessee—will prevail.