Preview: No.2 Florida State at No. 10 Louisville—Who’s Ready For A Real Challenge? 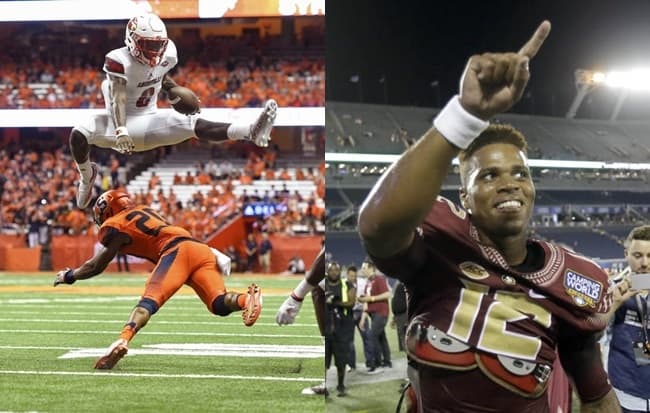 It can be real tough sometimes figuring which teams in college football are legitimate and which are pretenders. Which ones appear to be great because they are or because they have played nothing but inferior teams? Who’s going to be up to the task when they play some legitimate competition?

Fans of the No. 2 Florida State Seminoles and No. 10 Lousiville Cardinals will find out Saturday afternoon if their team is ready for a real challenge when the two face off in Louisville.

An argument could already be made that Florida State is for real with how they turned it around against Ole Miss and pulled out the win, but since then, the only team they played was an FCS one that was decimated by suspensions (Charleston Southern).

Louisville has been an offensive machine the first two weeks of the season thanks to the tremendous play of sophomore quarterback Lamar Jackson. After tearing up Texas A&M’s defense in the Music City Bowl (four touchdowns, 453 yards (227 passing, 226 rushing)) he has torn up the competition this season even more.

Against Charlotte, he accounted for 415 yards (286 passing, 119 rushing) and eight touchdowns (six passing, two rushing). Syracuse couldn’t slow him down either (610 total yards and five touchdowns).

Both teams have dominated poor competition. Florida State did dominate Ole Miss in the second half of their game, but they were dominated in the first half, but the Seminoles early struggles could easily be because they had a freshman, Deondre Francois, was making his first start at quarterback.

With two offenses capable of putting up a ton of points, the outcome of the game will be decided by whose defense is going to be able to slow down the other’s offense more. Losing an All-American defensive back like Derwin James is going to make life a little bit harder for the Seminoles defense, but the team has more than enough talent to make up for his absence.

As long as the defense shows up as it did in the second half of the Ole Miss game, Florida State should be fine. However, if the Seminoles defense plays as it did during the first half, Lamar Jackson could put on a show much like he did during Louisville’s first two games of the season.

The question is whether the Cardinals defense can contain the Seminoles offense. Louisville’s secondary will give Deondre Francois his first real test of the season. DeAngelo Brown is one of the better defensive linemen in the country, but he’ll need some help from the rest of the line and the Cardinals linebackers to slow down Seminoles running back Dalvin Cook.

“He goes through the right reads, understands where to throw the ball, and he looks to be a quarterback first. He has the arm strength to make all the throws. I always look at a QB and ask, ‘Will he throw it into a tight window?’ A lot of guys won’t pull the pin. This guy will throw into tight windows and try to make a play, a lot like [Jameis] Winston. Winston was that kind of guy. He has a high ceiling to be a really good player.”

If Louisville is going to upset the Seminoles, the offense can’t get off to a slow start. The defense has to keep Cook from getting on track and not allow Francois to feel comfortable in the pocket. They can’t just start the game that way; they must keep it up for all four quarters. Give Francois and Cook a chance, and they will mount a comeback (like they did against Ole Miss).