Preview: No. 20 Oklahoma Sooners At Texas Longhorns—Winner Gets Job Security

When it comes to college football, it is entirely possible to go 1-10 and still have your fans consider the season a success. Sounds crazy, right? No one is happy when their team is so bad they only win one game—but they are if it’s the right game.

Texas and Oklahoma are going into the latest edition of the Red River Rivalry Saturday (aka the right game) with 2-2 records knowing full well that whoever leaves the game 2-3 may have to win out to secure his job at the end of the season. 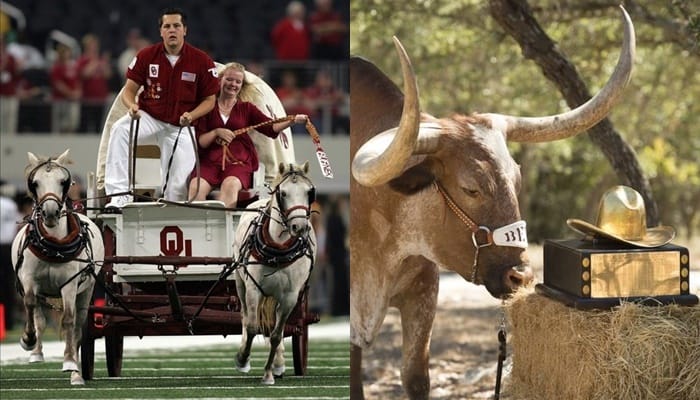 Both are accustomed to being among the upper echelon of college football’s elite, and when the season started Oklahoma was still considered one of the best. An upset loss to Houston and another at the hands of Ohio State have the Sooner on the verge of being knocked out of the top 25. Another loss will likely result in them being unranked for the first time since their 2014 bowl game.

Fans aren’t exactly calling for the head of Bob Stoops like they are Charlie Strong, but “Big Game” Bob hasn’t won a national title since 2000. They have finished in the top 10 nine times (and five times inside the top five), but two losses this early in the season does not bode well for him.

A third loss with the potential still for two more (Baylor and Oklahoma State) and possibly four (Texas Tech, West Virgina) could make some begin to wonder if Stoops has been there too long.

Charlie Strong has been hard at work trying to rebuild the Texas program, and when the season started with a dramatic double-overtime win over then-No. 10 Notre Dame, it appeared as if the Longhorns were indeed back. The AP voters wanted to believe it so bad that they moved Texas from unranked to No. 11 after the win (Coaches Poll ranked at No. 20).

A loss to Cal and another to Oklahoma State knocked the Longhorns out of the top 25 and moved the conversation from “their back” to “when will Charlie Strong get fired?” Rumor has it that Strong is a lame duck coach, but a win over the Sooners would go a long way towards shutting down the rumors.

But it is not going to be easy.

His defense has been horrible this season, which is why Vance Bedford was demoted. Strong will be taking over the defense, and with the talent, they do have on that side of the ball there is every reason to think the defense will play better from this point on. If only they didn’t have to face an offense like Oklahoma’s as their first test with Strong calling the shots.

Baker Mayfield came into the season as one of the top Heisman candidates for a reason. When he gets hot, and his running back tandem of Samaje Perine and Joe Mixon get rolling, the Sooners are almost impossible to slow down let alone stop. The best way to do so is to keep them off the field.

At full strength, the Longhorns could do just that. Their own running back tandem of Chris Warren III and D’Onta Foreman are not to be taken lightly either, but the Longhorns will be without the services of Warren for the next six to eight weeks.  Foreman is expected to play but will not be 100 percent healthy if he does.

Foreman may be in luck. The Sooners defense is going to be without the services of two starters, tackle Charles Walker (concussion) and linebacker Tay Evans (retired due to continued concussion symptoms).

Shane Buechele gives the Longhorns offense a capable and talented passer, but Texas will need to keep the Sooners offense off the field if they want to win. It would be easier to see their running game getting the job done with Warren and Foreman. To make sure Foreman can finish the game, the Longhorns will need to make use of former starting quarterback Tyron Swoopes as much as they can.

If they don’t, and Baker Mayfield gets time to get the kinks worked out against the Texas defense, he will put up 50 on Texas without breaking a sweat.

Should that happen–it will not be surprising if offensive coordinator Sterlin Gilbert is in charge of the team when it faces Iowa State (in spite of all the talk Strong will not be fired mid-season and the “pledges” of support).