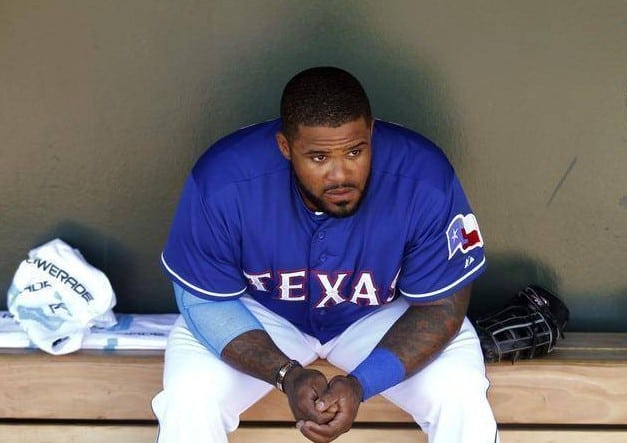 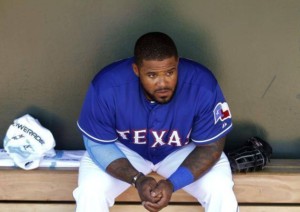 The Texas Rangers found the perfect solution to the over-crowded middle infield problem they had when second baseman Rougned Odor returned from his seven-game suspension, during which Jurickson Profar did a more than adequate job filling in for him. The solution was to make Profar the designated hitter and bench current DH Prince Fielder. The plan worked, as Profar kept hitting and the Rangers won Saturday and Sunday, completing a sweep of the Seattle Mariners. Of course, the one person who was not happy was Fielder, and he has no problem voicing his displeasure.

When asked Sunday if he was sitting because of any physical ailment, Fielder replied, “Just my heart and my feelings.” Fielder is hitting just .187 with three home runs. He’s also making $24 million this year and has four more years on his contract at that salary.

“It’s his call and I respect that,” Fielder said about manager Jeff Banister taking him out of the lineup. “I know I’m going out there and giving what I’ve got. Last year, guys struggled early and turned it around. But we’re winning. I’m not one to complain about it. But I want to make my movie turn out right.”

The six-time all-star says his struggles this season put him in uncharted territory. The stats say that Fielder is working his way into favorable counts, but has been unable to take advantage of those situations. He also says he’s not preoccupied with trying to hit for power. “I’m trying to get hits. Trying to drive in runs. Trying not to get benched for two days. I’m just trying to play baseball. I don’t care about homers,” he said Sunday.

Banister says sitting Fielder may be best for both the team and the player. “I look at this as a 20-second timeout for a guy that needs a 20-second timeout,” Banister explained. “Because in his own words, never been here before. This is new territory. When you’re in new territory, maybe you look through a different lens. Who knows? Might be a brave new world on the other side for him.”

The manager adds that benching Fielder for a couple games is just part of his job. “I have to make challenging decisions and unpopular decisions,” Banister said. “Having players understand them isn’t necessarily the focus of the conversation. It’s about: There is a need. Whatever he needs to do [to get himself right], he can go work on it right now without being judged for not being successful enough. This is a very accomplished hitter. I believe in him.”

Whether Fielder’s benching continues or lasts just two games remains to be seen. With the way Profar has played over the last nine games, it’d be foolish to take him out of the lineup at this point, especially with the Rangers riding a three-game winning streak. There’s a chance Fielder could see some time at first base with Mitch Moreland also having a down year and in the midst of a slump, but it may not be easy for Fielder to reclaim his spot as the every day DH.

For Banister, it’s a tricky tightrope to walk between putting the best lineup on the field and trying to get the Rangers’ $24 million DH headed in the right direction. For the time being, it’d be tough to blame Banister for continuing to keep Fielder on the bench, whether he likes it or not.